Researchers from The Hong Kong University of Science and Technology (HKUST) and Hong Kong Baptist University (HKBU) have decoded for the first time the demographic history, genetic structure, and population connectivity of a deep-sea limpet widely distributed in vent and seep ecosystems in the Northwest Pacific. This study not only enhances our knowledge of the historical population divergence and contemporary gene flow of deep-sea organisms under the intricate interactions amongst local habitats, seafloor topography, and ocean currents, but also serves as a scientific basis for better conservation of marine biodiversity and more effective environmental management.

The discoveries of deep-sea hydrothermal vents in the late 1970s and hydrocarbon seeps in the early 1980s have significantly changed our understanding of how life has evolved on Earth. Unlike shallow-water ecosystems that are mainly driven by photosynthesis, deep-sea vent and seep ecosystems – characterized by darkness, high pressure, and often high concentrations of toxic substances - are primarily supported by chemosynthesis. Distributed in tectonically active areas and along continental margins, these ecosystems form “life oasis” in the deep ocean and harbor a diverse amount of creatures. Neighboring vent fields and seep areas are usually separated by tens to hundreds of kilometers. Nonetheless, a number of species have been found thriving in both habitats, raising intriguing questions on how their populations achieve connectivity between widely separated habitats and whether differences in habitat types facilitate intraspecific divergence.

Now, a research team led by Prof. QIAN Peiyuan, Head and Chair Professor of HKUST’s Department of Ocean Science and Prof. QIU Jianwen, Professor of HKBU’s Department of Biology, has collaborated with marine scientists from Ocean University of China and Japan Agency for Marine-Earth Science and Technology (JAMSTEC) to study the demographic history, genetic structure, and population connectivity of a deep-sea limpet widely distributed in vent and seep ecosystems in the Northwest Pacific.

With the application of population genomics analyses, the team for the first time unveiled four distinct habitat-linked genetic groups of deep-sea limpets in the Northwest Pacific - one in vent and three in seep ecosystems. Demographic analyses further revealed how the limpets’ migration events have contributed to the formation of these four genetic groups. Historically, the deep-sea limpet has diversified into two seep genetic groups, with the first seep genetic group inhabiting the shallower seep area in the Kuroshima Knoll. A few limpet larvae from which then invaded into the Okinawa Trough possibly along with the historical shifting of the Kuroshio Current, adapted to the vent habitats within the trough region, and eventually formed the Okinawa Trough vent genetic group. Meanwhile, the second seep genetic group inhabiting the deeper seep areas recently diverged into two distinct seep genetic groups in the Jiaolong Ridge of the South China Sea and the Sagami Bay. Such a pattern of genetic divergence may have been associated with the barrier effect of the Luzon Strait and the reduced methane supply of the Jiaolong Ridge seep in the South China Sea over the last two thousand years.

The team has also analyzed the physical ocean modeling data to illustrate the potential roles of seafloor topography and ocean currents in shaping the genetic connectivity, contemporary migration, and local hybridization of the deep-sea limpets. Particularly, numerical particle release experiments demonstrated that water transport between the Okinawa Trough and the open Northwest Pacific was topographically constrained (especially at and below 800 m depth), which helps to explain the high level of population connectivity and genetic homogeneity of limpet populations that colonize the vent fields in the Okinawa Trough. Numerical particle release experiments also inferred that transport of the North Pacific Intermediate Water may have facilitated the contemporary dispersal of a few limpet larvae from the Sagami Bay seep into the Okinawa Trough vents, and thereafter accounted for the hybridization between individuals belonging to these two genetic groups.

This study has enhanced our knowledge of the historical population divergence and contemporary gene flow of deep-sea organisms inhabiting hydrothermal vents and hydrocarbon seeps under the intricate interactions amongst local habitats, seafloor topography, and ocean currents. “Population connectivity is a critical criterion in assessing the biodiversity conservation value of any particular habitat as stipulated by Convention on Biological Diversity (CBD), International Maritime Organization (IMO) and other United Nations (UN) agencies, along with various international organizations. Therefore, we anticipate the results of this study will deepen our understanding of the demographical mechanisms and population connectivity of deep-sea organisms, lay a foundation for the conservation of marine biodiversity and sustainable utilization of marine resources, and pave the way for the establishment of regional environmental management plans as well as the designation of marine protected areas in global ocean,” said Prof. QIAN, also David von Hansemann Professor of Science.

The research findings were recently published in the international academic journal Molecular Biology and Evolution. 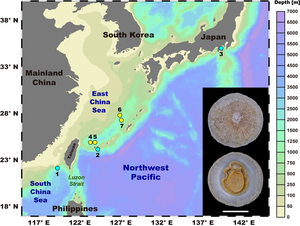 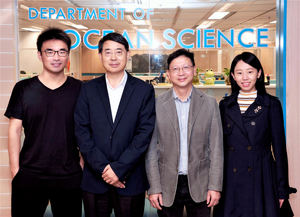