An investigation into the impact of the 2020 state of emergency declarations on exacerbated bronchial asthma (*1) in children has been conducted in Kobe City, Hyogo Prefecture, Japan. The research group included Project Assistant Professor YAMAGUCHI Hiroshi and Professor NOZU Kandai of the Department of Pediatrics at Kobe University’s Graduate School of Medicine, and the Kobe Children’s Primary Emergency Medical Center Director ISHIDA Akihito.

The survey covered patient visits to the Kobe Children’s Primary Emergency Medical Center for the period from 2011 to 2020. First of all, the researchers identified yearly spring and fall peaks in the number of asthma patients in the annual data up to 2019. In addition, they also found a significant correlation between children’s asthma attacks and atmospheric temperature increases. Furthermore, they revealed that asthma attacks occurred more easily in children aged 5 and under the higher the level of atmospheric sulfur dioxide (SO2). The average temperature for 2020 was similar to the previous year, however under the state of emergency in spring, the number of patients with bronchial asthma declined as SO2 levels decreased. After the state of emergency was lifted, the regular peak in patient numbers was seen in fall. It can be supposed that this is due to the relationship between the occurrence of asthma attacks and exposure to SO2, as well as the increase in viral infections resulting from the recommencement of social activities and in-person interactions.

These research results were published online in the ‘International Journal of Environmental Research and Public Health’ on October 29, 2021.

Studies in numerous countries have reported various environmental factors involved in bronchial asthma, including infections (such as rhinovirus, RS virus and influenza), meteorological factors (such as temperature, pressure and humidity), allergens (eg. pollen, yellow sand) and atmospheric pollutants (such as SO2, nitrogen oxide (NO2) and PM2.5). However, the effects of environmental factors on bronchial asthma in children living in Kobe City was unclear, as no study had been conducted into the seasonal and yearly changes in the numbers of patients. In addition, it was also not known what impact the 2020 state of emergency declarations in response to the novel coronavirus pandemic had on the number of pediatric inpatients with bronchial asthma in Kobe City.

Research Findings
A total of 278, 465 patients under the age of 16 visited the Kobe Children’s Primary Emergency Medical Center in the 2011-2020 period, of which 7,476 were diagnosed with bronchial asthma. This believed to be the largest number of patients with bronchial asthma in a single-institution study.

First of all, the researchers investigated trends in patient numbers between 2011 and 2020. From the results, they discovered that for the 2011-2019 period there were clear peaks in the spring and fall of every year. In contrast to this, no peak was observed during the state of emergency in spring 2020, however a similar peak in the number of patients compared to previous years was observed in the data for October 2020 when the state of emergency had been lifted (Figure 1). Next, the researchers looked at what kind of environmental factors in Kobe City were related to pediatric bronchial asthma for the 2011-2019 period in order to determine the factors that caused the 2020 change in the number of patients. The subsequent results revealed a significant correlation between the total number of pediatric patients with respiratory difficulties and the increase in average atmospheric temperature. Furthermore, in children aged 5 and under, there was a significant correlation with increased concentrations of SO2. However, no significant correlations were found with other factors relating to climate, pollutants, the number of patients with respiratory infections (e.g. influenza, RS virus), typhoons, yellow sand nor pollen levels.

Due to the state of emergency declarations, 2020 levels of atmospheric pollution in Kobe City were markedly lower than in other years, with a significant decrease in SO2 levels (Figure 2). It is believed that the peak in bronchial asthma admissions was not observed in spring 2020 due to the decrease in SO2 and other impacts of the state of emergency, such as reduced person-to-person contact due to social distancing, and handwashing and mask-wearing measures that created a more hygienic environment. It is thought that the peak in cases returned in fall 2020 due to infection transmission resulting from increased contact between children, and the increase in environmental pollution due to the recommencement of social activities, which also increased exposure risks.

Further Developments
It is said that bronchial asthma attacks often occur on cold days and before or after a typhoon. However, this research study has shown that in Kobe City, bronchial asthma is more easily triggered on high temperature days, and is also exacerbated by SO2 emissions, particularly during the back-to-school periods. Preventative measures such as taking care not to be outside for long periods during high temperature days, and avoiding places with high levels of car and factory emissions could help, particularly during spring and fall when there is a high number of asthma attacks.

In addition, a relationship was also found between the number of asthma patients and the increase in person-to-person contact and social activities after the state of emergency was lifted. Therefore, measures that create a hygienic environment (such as mask-wearing, handwashing and gargling) are also important for children who have a history of respiratory issues.

Glossary
1. Bronchial Asthma:  Bronchial asthma is an illness characterized by repetitive instances of breathing difficulties due to the narrowing of the airways. In serious cases the patient may become unable to breathe, resulting in death.
2. Sulfur Dioxide (SO2): This is produced by burning coal and oil. Industrial emissions of SO2, such as those from factories, are known to cause acid rain. In addition, SO2 emissions were also responsible for the Yokkaichi asthma cases that occurred in the city of Yokkaichi (Mie Prefecture, Japan) from the 1960s to the early 1970s. It is a known cause of respiratory illnesses.

Journal Information
Title:
“Impact of the state of emergency during the COVID-19 pandemic in 2020 on asthma exacerbations among children in Kobe city, Japan”
DOI: 10.3390/ijerph182111407

Impact of the state of emergency during the COVID-19 pandemic in 2020 on asthma exacerbations among children in Kobe city, Japan 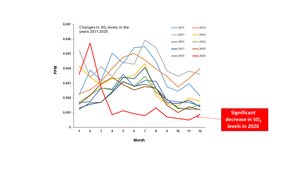