Osaka, Japan – Magnetite is a type of iron oxide with the chemical formula Fe3O4. It has many interesting properties that make it the focus of research for use in spintronics devices. Researchers from Osaka University have shown that Fe3O4 thin films can be grown on a hexagonal boron nitride (hBN) substrate, meaning the films can be easily transferred into different systems. Their findings were published in ACS Applied Electronic Materials.

We are constantly learning more about the properties of materials. Sophisticated details of the electronic and magnetic properties of metal oxides—such as Fe3O4—can be harnessed to optimize complex systems such as disk drives and sensing devices.

The behavior of the electrons in Fe3O4 gives it distinctive properties. For example, it changes from being an insulator to conducting electric charge at a specific, very low temperature and loses its magnetic properties at the high temperature of 578°C. These properties can be used to tune devices for specific applications.

Growing high-quality thin films of Fe3O4 is therefore important and has been achieved on a variety of stiff substrates. However, achieving flexible devices is regarded as an important goal in the development of electronics, and this requires films that can be easily transferred onto flexible substrates.

hBN is a physically and chemically stable material, making it an excellent choice for growing Fe3O4 films. hBN has layers that associate through der Waals interactions, which are weaker than ionic and covalent bonds, making them easier to manipulate and move.

“Generally, if you grow crystals of one material on another crystal, the way their atoms are arranged has to match or the film will grow with defects,” explains study first author Shingo Genchi. “However, owing to the van der Waals interactions of hBN, high-quality Fe3O4 could be grown despite there being a mismatch, showing the potential of hBN as a universal transferrable substrate.”

The properties of the Fe3O4 film grown on hBN were investigated, and it was found that the transition temperature from an insulating to metallic material was not affected by hBN. The temperature of the change was also found to be the same for Fe3O4 films with different thicknesses.

The film was transferred onto a SiO2/Si substrate and again retained its properties, demonstrating the versatility of the hBN approach.

“Our high-quality Fe3O4 films are an exciting next step in the development of spintronic materials,” says study corresponding author Hidekazu Tanaka. “We believe that our films will make an important contribution to flexible devices.”

Stable and moveable; is hexagonal boron nitride the universal foundation? 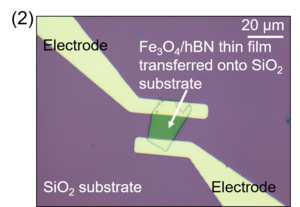 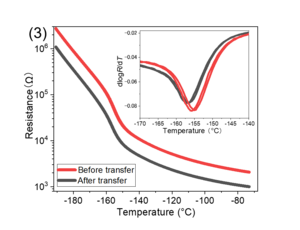