A joint press release by Charité, the HIRI, the MDC and the RWTH Aachen University Medical Center

The majority of patients with severe COVID-19 develop unusually pronounced scarring of the lungs. This was the conclusion of a study conducted by researchers from Charité – Universitätsmedizin Berlin, the Helmholtz Institute for RNA-based Infection Research (HIRI), the Max Delbrück Center for Molecular Medicine (MDC), the RWTH Aachen University Medical Center and the Robert Koch Institute. Writing in Cell*, the researchers report that macrophages – immune cells which engulf and digest foreign substances – play a central role in this regard. Some of the mechanisms involved in COVID-19-related respiratory failure resemble those seen in idiopathic pulmonary fibrosis, a previously incurable disease which causes scarring of the lungs. Misguided wound healing responses resulting in scarring may explain why COVID-19 patients remain in respiratory failure for so long, and why they require prolonged extracorporeal membrane oxygenation (ECMO) support.

In patients with severe COVID-19, damage to the lungs is so severe that the body can no longer absorb sufficient oxygen from the air. Experts refer to this condition as ‘Acute Respiratory Distress Syndrome’ (ARDS). In order to have a chance of surviving ARDS, patients must receive oxygen therapy, mechanical ventilation, or extracorporeal membrane oxygenation (ECMO), in which a machine assumes the function of the lungs. When compared with other causes of ARDS, the lung damage caused by COVID-19 is particularly severe. “Patients with severe COVID-19 often have a particularly severe form of ARDS,” says co-corresponding author and lead author Prof. Dr. Leif Erik Sander of Charité’s Department of Infectious Diseases and Respiratory Medicine. “The widespread destruction of the normal pulmonary anatomy results in the need for prolonged invasive mechanical ventilation or even ECMO therapy. Sadly, this is associated with a high mortality rate of approximately 50 percent.”

The researchers considered a number of potential causes for this prolonged lung failure, including a particular type of ARDS which causes pulmonary scarring leading to tissue thickening and stiffness. Tissue remodeling of this type (known as fibrosis) had been observed in certain patients relatively early on in the pandemic. The interdisciplinary research consortium, which brought together researchers from all across Germany, has now confirmed that severe COVID-19-related lung failure is frequently associated with extensive scarring of the lungs. “A misguided response by macrophages, also known as the ‘big eaters’ of the immune system, may be partly responsible for this scarring,” states the study’s second co-corresponding author and co-study lead, Dr. Antoine-Emmanual Saliba, Research Group Lead at the HIRI in Würzburg, Germany.

As part of their research, the team used a number of microscopic imaging techniques to study lung tissue from deceased COVID-19 patients. Describing their findings, Prof. Dr. Peter Boor, study lead at the RWTH Aachen University Medical Center’s Institute of Pathology, says: “Almost all affected patients showed extensive tissue damage. The majority of the alveoli had been destroyed and the alveolar walls showed extensive thickening. We also found ubiquitous deposits of collagen, the main component of scar tissue. All of this is characteristic of severe fibrosis.” He adds: “These observations suggest that COVID-19-related respiratory failure is in fact fibroproliferative ARDS, a particularly severe form of lung failure. This might explain why affected patients require such prolonged ventilation.”

The reason for this phenomenon was initially unclear. “In patients with COVID-19, respiratory failure typically only develops in week two or three after symptom onset, at a point when viral loads have started to decline,” explains Prof. Sander, adding: “This suggests that lung failure is not caused by the uncontrolled viral replication, but by secondary host responses, including those involving the immune system.” The researchers therefore analyzed the composition and characteristics of immune cells taken from bronchioalveolar lavage and lung tissue samples of severe and deceased COVID-19 patients. In order to study individual cells in greater detail, the researchers used state-of-the-art single cell analysis.

Using this technology, the researchers were able to show that the pronounced accumulation of macrophages is one of the key features in COVID-19 patients who develop respiratory failure. In addition to eliminating invading pathogens or cellular debris, these ‘big eaters’ of the immune system also play a role in wound healing and tissue repair. “Astonishingly, the macrophages found in patients with COVID-19 display similar characteristics to those seen in idiopathic pulmonary fibrosis, a form of lung disease which causes chronic scarring,” emphasizes Dr. Saliba. Idiopathic pulmonary fibrosis is an incurable disease, which causes progressive scarring of the lungs leading to loss of function. The disease, whose cause remains unknown, has the worst prognosis of all types of pulmonary fibrosis. “The macrophages found in severe COVID-19 interact with certain connective tissue cells, which are responsible for producing scar tissue. These cells undergo rapid proliferation and produce large quantities of collagen,” adds the expert on single-cell research.

Using cell cultures, the researchers discovered that SARS-CoV-2 exerts an effect on macrophages which may, in turn, accelerate the process of fibrosis. As part of this experiment, the researchers first isolated macrophage precursor cells from the blood of healthy individuals and subsequently stimulated them with SARS-CoV-2. An analysis of approximately 7,000 proteins showed that the stimulation resulted in the immune cells producing increased amounts of proteins responsible for inducing scarring. These findings were reminiscent of the processes observed in idiopathic pulmonary fibrosis. “At the very least, SARS-CoV-2 is a potential trigger for a misguided macrophage response,” explains Prof. Dr. Matthias Selbach, study lead at the MDC. “Rather than replicating inside the immune cells, the virus appears to reprogram them. Interestingly, stimulation of macrophages with the influenza virus did not result in the same observation. While the influenza virus showed rapid replication inside the immune cells, it did not trigger the facilitation of processes involved in scarring.”

“Our data therefore show parallels between COVID-19 and idiopathic pulmonary fibrosis,” says Dr. Saliba, summarizing the researchers’ findings. He continues: “This may explain why some of the risk factors for COVID-19 are also risk factors for idiopathic pulmonary fibrosis. These include underlying medical conditions, smoking, male sex and being aged over 60. However, there is one crucial difference between the two diseases: in COVID-19, scarring is – at least potentially – repairable.” The researchers were able to follow this development using CT images. In patients with COVID-19 who had received ECMO support, CT imaging initially showed typical ground glass opacities which, over the course of the illness, became increasingly dense and developed scarring. In patients who were successfully weaned from ECMO support and later recovered, these opacities gradually resolved – although some patients were left with clear evidence of residual scarring.

The researchers will next investigate in greater detail the cellular processes involved in the mechanism of fibrosis resolution. “Gaining a better understanding of fibrosis resolution will hopefully aid in the development of new therapeutic strategies not only for COVID-19, but also for patients with previously incurable pulmonary fibrosis,” says Prof. Sander. “Given the important role macrophages play in both diseases, it is also likely that the inhibition of these cells could help prevent the formation of scar tissue.”  Several Charité research groups are now studying the effectiveness of blocking receptors which enable macrophages to infiltrate lung tissue.

About this study
The study was conducted by a nationwide consortium working under the auspices of the ‘German COVID-19 OMICS Initiative’ (DeCOI). Primarily funded by the German Research Foundation (DFG), the research also received funding from the Federal Ministry of Education and Research (BMBF) via the BMBF-funded MSTARS proteomics research core and a range of collaborative projects conducted under the auspices of the NUM academic research network.  The research was further supported by the German Registry of COVID-19 autopsies (DeRegCOVID). The NUM academic research network, initiated and coordinated by Charité, pools the strengths of Germany’s 36 university hospitals. The data underpinning the published article were generated using the Pa-COVID-19 platform. Pa-COVID-19 is a prospective patient registry for patients with COVID-19 at Charité. The aim of the registry is to collate comprehensive clinical and molecular data on patients with COVID-19 in order to identify individual risk factors for severe disease, as well as prognostic biomarkers and treatment targets. The protocol for the study is available here 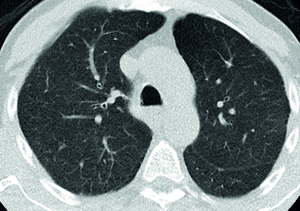 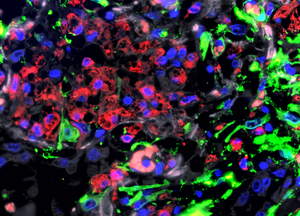 Macrophages in the lungs of a patient with severe COVID-19