This study is led by Prof. Guangshun Huang (University of Science and Technology of China), with wisdom from senior researcher Dr. Rinaldo Baldini Ferroli (INFN Laboratori Nazionali di Frascati, Italy). Baryon is one of the types of hadrons, which are regarded as bound systems of quarks roughly. The well-known particles, protons and neutrons, or collectively called as nucleons, are the lightest baryons, and they constitute more than 99% of the observable matter in the Universe. Amazingly the internal structures of nucleons have still not been fully understood even though after 100 years of discovery. A nucleon has three valence light quarks (u or d) inside; if one or more of its u or d quarks are replaced by heavier quarks (s, c, b or t), it becomes a hyperon, as Fig.1 shows. The spin ½ SU(3) baryon family has 8 members, so-called baryon octet. Study on hyperons provides extra information to probe the mystery of baryons.

About 10 years ago, Guangshun Huang started to organize the studies related with precision measurements and tests of quantum chromodynamics (QCD) at the BESIII experiment, which is a unique facility in the tau-charm energy region attracts 500 scientists all over the world forming the BESIII Collaboration. Together with Prof. Haiming Hu (Institute of High Energy Physics, the Chinese Academy of Sciences), they made a plan to take data in the center-of-mass energy region between 2.0 to 3.08 GeV, and then successfully collected electron positron collision data at 22 energy points with a total integrated luminosity of 650 pb-1, which is the largest data sample in the energy region in the world. Beside the dedicated energy scan data for QCD studies, the team also uses other huge data samples collected at higher energies taking advantage of initial-state-radiation (ISR) technique. Prof. Frank Maas (Helmholtz Institute Mainz, Germany), Prof. Tord Johansson (Uppsala University, Sweden) and their groups later joined the effort, as well as other colleagues.

Dr. Lei Xia, Xiaorong Zhou of Huang’s group and Dr. Yadi Wang, Christoph Rosner of Maas’s group measured the proton form factors using the scan data, obtained the most precise ratio of electric to magnetic form factor in the time-like region, clarifying the long time tension between the BaBar and PS170 experiments, and also gave the magnetic form factor for the first time. Dr. Alaa Dbeyssi  and Dexu Lin of Maas’s group did the work also with the ISR technique, using the methods of both the ISR photon undetected and detected.

Dr. Xiaorong Zhou of Huang’s group and Dr. Paul Larin of Maas’s group together with Dr. Jifeng Hu (South China Normal University) measured the neutron form factors, for which previous data were very rare and the result by the FENICE experiment did not agree with the QCD models. The BESIII team has solved the problem based on over 2000 well identified neutron-antineutron pairs representing a big improvement. Interesting oscillations in the effective form factor have been observed for both proton and neutron cases, though apparently there is a phase difference.

Dr. Xiaorong Zhou and Liang Yan of Huang’s group measured the effective form factor of L, the lightest hyperon. They found the cross section does not vanish near the production threshold, and this abnormal enhancement of baryon pair production has driven a lot of theoretical discussions. Dr. Karin Schonning and Cui Li of Uppsala group determined the relative phase difference between the electric to magnetic form factor in addition to the form factor ratio, and this is the first complete measurement of the hyperon electromagnetic form factor, a milestone in the study of hyperon structure.

Figure 2 summarizes the cross section line-shapes for a variety of baryon-antibaryon pairs, mostly dominated by the research team. A visible common feature is that the cross section jumps to a non-zero value at production threshold, followed by a plateau in a wide range, and eventually falls down. These studies shed new light for understanding the interactions and fundamental structure of baryons.

Guangshun Huang
University of Science and Technology of China
hgs@ustc.edu.cn 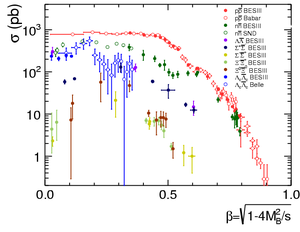 The production cross section of baryon-antibaryon