Optical inverse problems, such as optical metrology and inverse optical design, have always been a research field of significant focus because of their wide applications in science and industry. Advances in photonics could lead to substantial improvements in helping scientists design novel photonic devices or help engineers for faster metrology. These photonics devices might be used in the near future. The hard disk could become cheaper for faster metrology and higher yield, all of which could benefit society for generations to come.

In a new paper published in Light: Advanced Manufacturing, a team of scientists led by Associate Professor Lei Shi from the State Key Laboratory of Surface Physics at Fudan University has investigated a new idea in thin-film neural networks (TFNNs) that could dramatically improve processing times of all-optical neural networks. The paper, titled “Thin-film neural networks for optical inverse problem,” saw their TFNNs used to design photonics devices, multilayer thin films, to mimic the optical response of three types of cone cells in the human retina.

Another issue that the research team wanted to look at was the number of layers in multilayer thin-film neural networks. In the past, an increase in the number of films would dramatically reduce the processing speed of metrology. It is a problem for many commercial applications, and a solution must be found that minimizes the speed drop.

Mapping from the data space to the parameter space is implied in the training process of TFNNs. The mathematical details of TFNNs were demonstrated by exploiting their structural similarity with multilayer neural networks (N.N.s). The reflectance of thin films at normal incidence is measured as the target for training the TFNNs. For monolayer thin films, both the thickness and refractive index of the layer were optimized. The multilayer thin films are treated as TFNNs to optimize all the consistency in hundreds of layers.

The time required for optimization is significantly shortened compared with conventional methods. Conventional approaches for thin films with 232 layers took 67.498 s per iteration, compared to the research team’s 0.924 s per iteration process. The team designed and fabricated three types of multilayer thin films that mimic three types of cone cells in the human retina. An image-forming system is built, recording the light passing through these multilayer thin films as a colored photo.

In optical metrology, through the training of TFNNs for extracting thin-film parameters, they can effectively optimize all the parameters in monolayer and multilayer thin films. In inverse optical design, the team introduced the design idea and process of TFNNs. TFNNs were used to design multilayer thin films to mimic the optical response of three types of cone cells in the human retina. 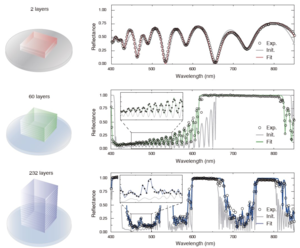 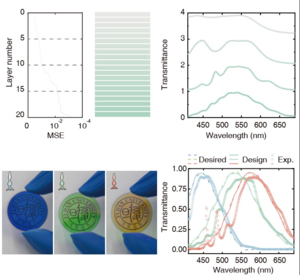