The Department of Defense (DOD) has awarded a $1.5 million grant to a research team in The University of Texas at Arlington’s Aerodynamics Research Center to examine how lasers could be utilized to destroy hypersonic threats to the United States.

Luca Maddalena, a professor in the Mechanical and Aerospace Engineering Department and director of the Aerodynamics Research Center, is principal investigator on the grant, which was awarded by the DOD’s Joint Hypersonic Transition Office through the University Consortium for Applied Hypersonics. The multi-institutional grant, which includes Serhat Hosder of Missouri University of Science and Technology as co-principal investigator, also involves industry collaborators Lockheed Martin, Ansys Inc. and Speckodyne Corp.

Hypersonic missiles are faster than traditional missiles currently used for air defense. Lasers could be used as a countermeasure, but first must be tested to determine if and how they can be most effective.

“It is critical to protect the U.S. against emerging hypersonic threats,” Maddalena said. “Missiles may not be as effective as interceptors as they are against ballistic threats, so we need to better understand how and when to use lasers as an effective countermeasure.

“Hypersonic missiles travel so fast that the air surrounding them becomes plasma. Plasma might shield the vehicle from laser-directed radiation, but in other situations, it might amplify the damage inflicted by the laser.”

UTA’s arc-heated, hypersonic wind tunnel, which came online in 2019, “is the only university-based facility with the capabilities to recreate that environment and the cutting-edge instrumentation to allow us to see and quantify how lasers will work in different situations,” Maddalena said.

The wind tunnel boasts a femtosecond laser system, which is the only one of its kind in use in an arc-heated wind tunnel in the U.S. Femtosecond lasers produce a very short laser pulse in the order of one-million-billionth of a second.

Since the tunnel’s activation, Maddalena has accrued nearly $4.5 million in funding from the DOD and other sources. That includes a $195,650 Defense University Research Instrumentation Program grant from the Office of Naval Research to add coherent anti-raman spectroscopy to the wind tunnel’s femtosecond laser diagnostics, allowing UTA researchers to measure characteristic temperatures and the composition of the plasma.

“The most significant impact of this project is our contribution to winning the hypersonic race—a national imperative,” said Erian Armanios, chair of the Mechanical and Aerospace Engineering Department. “The race is on, and UTA is rising to the challenge.”

UTA’s Aerodynamics Research Center boasts low-speed, transonic and supersonic wind tunnels and a hypersonic shock tunnel. It is one of the leading facilities in the nation and has been in service for more than 35 years. Current research has focused on experimental high-speed and high-temperature aerodynamics, shock/boundary layer interaction and detonation. 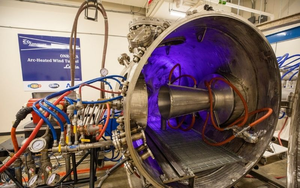