Reef fish, such as emperors, tropical snappers and rockcods, help keep numbers of crown-of-thorns starfish in check on the Great Barrier Reef, according to a new study from the Australian Institute of Marine Science.

Published today in Nature Communications, the study found the abundance of the coral-eating starfish increases in places where fish species which are known to eat the starfish are removed.

Crown-of-thorns starfish (Acanthaster spp.) are native to coral reefs in the Indo-Pacific. They are a major contributor to coral loss when found in large numbers, as they feed on the living tissue of many hard coral species. On the Great Barrier Reef, four outbreaks have occurred since the 1960s – the most recent is still underway.

“More than 50 years ago concern was raised that removal of predators may contribute to starfish outbreaks. However, at the time only one predator of the starfish was known, the giant triton sea snail,” Dr Frederieke Kroon, AIMS ecologist and lead author said.

“Recent studies have revealed nearly one hundred species of coral reef organisms feed on different life stages of the starfish. Eighty of these are fish, including popular seafood species such as emperors, tropical snappers and rockcods.

“Our study is the first to explore how fisheries harvests of these fish species may affect starfish abundance.”

The scientists also compared 30 years of reef fish harvest data from the Queensland Department of Agriculture and Fisheries with crown-of-thorns starfish abundance data from AIMS’ long-term reef monitoring over the same period.

Dr Kroon said the relationship between the fisheries harvests and the numbers of starfish was striking.

“This relationship was strong for emperors, particularly redthroat and spangled emperors [Lethrinus miniatus and L. nebulosus], both of which are well-known predators of crown-of-thorns starfish.”

The relationship was also strong for tropical snappers and rockcods, including coral trout (Plectropomus spp. and Variola spp.).

“Since adult coral trout are not known to eat crown-of-thorns starfish, we are interested in what may explain this relationship. One possibility is that juvenile coral trout may eat small starfish, as part of their invertebrate diet,” Dr Kroon said.

“Combined, our results suggest that the removal of emperors, tropical snappers and rockcods contribute to increases in starfish numbers.”

The findings have provided an opportunity to investigate new tools for controlling outbreaks on the Great Barrier Reef and perhaps across the Indo-Pacific, such as targeted fisheries-based management.

“Starfish outbreaks continue to be a major cause of coral loss, but unlike other pressures like climate change, can be managed at local and regional levels,” Dr Kroon said.

Dr Kroon said the findings make a significant contribution to understanding possible drivers of starfish outbreaks, such as the natural tendency of the starfish to reproduce in high numbers and the role of water quality, as they are not mutually exclusive.

“It is very likely not one, but multiple factors which contribute to the outbreaks,” she said.

“Large-scale, long-term data such as those used this study, as well as experimental studies are the best scientific tools we have to help understand the complexities of crown-of-thorns starfish outbreaks, and to implement effective and efficient management interventions for their control.” 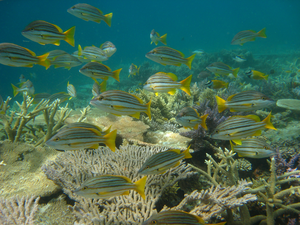 A school of stripey snapper, Lutjanus carpotonatus, on the Great Barrier Reef 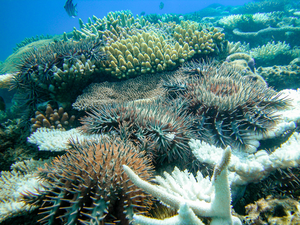 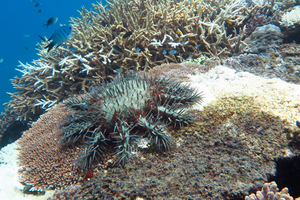