Species extinction, the introduction of non-native plants, climate change, and pollution are all major drivers of changes in biological communities due to human activity. Though these patterns have been well studied, most investigations focus on only one of these drivers and often in a localized area rather than more globally.

In a study published December 6 in Nature Communications researchers have compiled a dataset of over 200,000 plant species worldwide to demonstrate the extent to which species extinctions and non-native invasive plants reorganize plant communities in the Anthropocene, the current geological age dominated by human activity.

Daru began the project several years ago by mapping North American biomes while working with the lab of senior author Professor Charles C. Davis in the Department of Organismic and Evolutionary Biology and Curator of Vascular Plants at the Harvard University Herbaria at Harvard University. As the project progressed, Daru expanded it to include the biomes of Australia, South Africa, Europe and China. The study examined how landscapes and communities of plants change, especially following the bridging of the eastern and western hemispheres roughly 500 years ago. The analyses captured on a large scale the striking loss of species' distinctiveness across landscapes leading Daru to ask what are the contributing factors to these changes.

While both extinction and the naturalization of non-native plants can drive homogenization, the study showed that regardless of extinction scenario, the strongest contributor to biotic homogenizations resulted from non-native plants naturalized by humans. These changes occurred over a short evolutionary span of approximately 500 years and were facilitated – intentionally or unintentionally – by humans moving organisms around the landscape.

“Plants are foundation species. They sustain food chains and drive terrestrial ecosystem productivity,” said Davis. “This means that plant distributions often underlie the biogeographic histories of other organisms so it’s important to understand the impact of anthropogenic change in plant communities.”

“The study’s results highlight yet another imprint of the Anthropocene and demonstrate the profound influence humans exert on regional biotas beyond changes in species richness,” said co-author Professor T. Jonathan Davies, The University of British Columbia.

“This study demonstrates the enormous value and utility of natural history collections far beyond their original use,” said Davis, “especially once they are digitized and mobilized online.”

Of the more than 200,000 species, 10,000 were known to be invasive plants naturalized to other parts of the world. Over 1,000 were species that had recently gone extinct (within the last three to four hundred years).

“Invasive species are naturalized intentionally or unintentionally,” said Daru, “but ultimately these naturalizations were aided by humans on an ever-shrinking planet.”

Widespread homogenization of plant communities in the Anthropocene 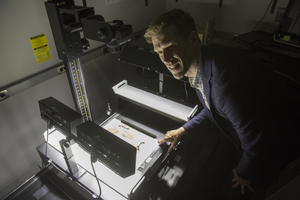