Managing the United States’ growing wild pig population has become a significant challenge over the past few decades, but new research from the University of Georgia may help landowners and government agencies fine-tune their strategies for limiting crop and property damage caused by the animals.

By tracking wild pig movements in and around the 310-square-mile Savannah River Site near Aiken, South Carolina, researchers at UGA’s Savannah River Ecology Lab and Warnell School of Forestry and Natural Resources confirmed some long-held suspicions about how pigs establish their home ranges—and shed new light on the question, as well. Not only are home ranges largely defined by the types of habitat pigs prefer, the researchers found, but air temperature and weather also are significant factors in predicting where animals will be at any given time.

This is important. According to the U.S. Department of Agriculture, up to 9 million wild pigs in the United States cause some $1.5 billion in damages each year, trampling crops, rooting up turf and topsoil, destroying levees and rights of way, and generally wreaking havoc across ever-widening swaths of the country. Both public agencies and private landowners engage in tactics such as trapping and aerial hunting to keep pig populations under control.

“Pigs are one of the most adaptive ecological generalists,” said Jim Beasley, an associate professor in Warnell and SREL. “They’re really intelligent animals, and management of them often has to be really adaptive, as well, changing on a week-to-week or even day-to-day basis. It all ties back to efficiency of management and how you allocate your resources.”

“The idea was to provide knowledge of wild pig movements at a temporal scale, at which most management practices and decisions occur,” said Lindsay Clontz, first author on the study and a UGA master’s graduate in forestry and natural resources. “The variables we incorporated were intended to be universal (i.e., habitat quality, weather, landscape characteristics), making it practical for landowners and managers to make informed management decisions on a week-by-week basis.”

Using baited traps to temporarily capture the animals, the team fitted 49 wild pigs with radio collars to track their movements over a year. Their data confirmed that pigs generally configure home ranges along tracts of their preferred habitat of bottomland hardwood swamps. Not only does this type of vegetation offer plenty of forage, but the availability of water is important in a hot climate (like dogs, pigs are not very good at regulating their body temperature and need water to cool down).

The researchers also found that female pigs tend to stay even closer to good habitat and water than males. “In most mammals, females are more tied to resources than males,” Beasley said. “Males often move around more throughout the landscape to gain access to females—especially pigs, which can breed year-round.”

Potentially of greatest use in wild pig management is the team’s finding of a relationship between temperature and air pressure and pig home ranges. Air pressure was used as a proxy for weather—a rising barometer typically signifies clear weather, while falling air pressure can mean an approaching storm. The researchers found that as temperature rose and air pressure fell, pig movements shrank.

“You’ve probably heard people talk about pets or animals responding before a storm,” Beasley said. “That’s exactly what we see with pigs: When these bad weather events hit, pigs tend to concentrate their movements, probably in areas of cover to stay out of the elements. That has a direct application in how we implement trapping or other control programs and deciding where and when to concentrate efforts.”

Someday it might have an application for something more important than property damage. Several countries in Europe and Asia are currently dealing with outbreaks of African swine and classical swine fever, two diseases that can devastate both wild and domestic pig populations. The viruses that cause such disease can transmit both through living and dead animals, even spreading to new populations through pork food products.

Germany, for example, has fenced off large zones of forestland in an attempt to limit the spread of African swine fever among its pig populations. The largest pork-producing country in Europe, Germany exports nearly $5 billion in pork products every year, and an unchecked outbreak would threaten that vital industry. The ability to predict the movements and location of wild pigs would be a tremendous asset in mitigating such a scenario.

“From the domestic standpoint, anytime there’s a detection of an outbreak like that, they often have to go in and slaughter millions of pigs and dispose of them and shut down exports,” Beasley said. “So it’s a major economic and ecological issue. A couple of years ago, Japan had a case of classical swine fever that has since spread rapidly, causing massive economic and ecological impact.”

This research was conducted in collaboration with the National Wildlife Research Center, a unit of the USDA Animal and Plant Health Inspection Service. The study was published in Pest Management Science; in addition to Beasley and Clontz, co-authors included NWRC research scientists Kim M. Pepin and Kurt C. VerCauteren. The work was supported with funding from USDA-APHIS and the U.S. Department of Energy under Award No. DE-EM0004391. 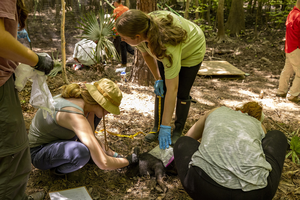 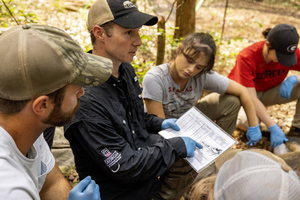 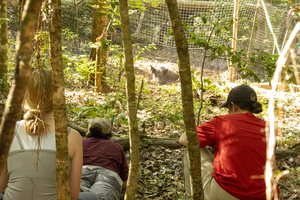