Two-Spirit, lesbian, gay, bisexual, trans, gender-diverse and queer students: the law is on your side when it comes to expressing your identity in school.

That’s according to new book, Making the Case: 2SLGBTQ+ Rights and Religion in Schools, co-written by Bruce MacDougall (he/him), a professor at UBC’s Peter A. Allard School of Law.

Written for students, parents, teachers, administrators and allies, the book examines where the Canadian courts stand when it comes to rights of identity versus religion and culture in schools.

MacDougall discusses the importance of protecting students’ rights in schools and why the book’s overall message is one of hope.

Why do we need this book?

School is a particularly important place for Two-Spirit, lesbian, gay, bisexual, trans, gender-diverse and queer students (2SLGBTQ+.) It’s the one place where they may feel comfortable enough to understand and embrace their identity, away from potential restrictions of their home life. It is also where students can learn about 2SLGBTQ+ people in the community, and where parents who have 2SLGBTQ+ children are likely to come into contact with other parents or people who can help their understanding and acceptance.

From attempts to ban same-sex dates to prom to efforts to remove books with same-sex themes from reading lists, schools have been a testing point for the right to identity versus the right to religious or cultural beliefs in Canada. There needs to be a balancing of rights, where at all possible, so that both can be protected, and if they can’t both be completely accommodated, then inclusion should trump exclusion. Courts in Canada, especially the Supreme Court of Canada, have consistently taken this approach.

Schools have to ensure that their policies and curriculum do not end up marginalizing or excluding 2SLGBTQ+ students. But the good news is this doesn’t usually require resources beyond the costs of training teachers and administrators. What it does require is thought, self-analysis and understanding including what is taught—and how it is taught.

Who is this book for?

This book discusses a number of legal principles and cases in an accessible way, providing students with a solid foundation to make their own cases at school and for their own information.

The overall message is one of hope: 2SLGBTQ+ students may feel that the law is against them. It is not. They are entitled to be included and this book explains why and how. Their parents will also understand that their children have this entitlement.

It will also help teachers and schools to rethink policies or design new training. The book identifies various issues that have already come up and where guidance has been given by the courts: bullying, ignoring transgender identification, proms, school materials, curricular content and access to washroom facilities.

The book profiles important cases in Canadian law regarding 2SLGBTQ+ rights and religion in schools. What are some that stand out to you?

In 2006, when the Supreme Court ruled that a Quesnel school guidance counsellor was properly subject to discipline by the teaching regulators, when that person wrote (in his own time) homophobic articles in the press, identifying himself there as a guidance counsellor. The court ruled that 2SLGBTQ+ students would not feel comfortable seeking his assistance at school.

In 2002, a publicly-funded Catholic school in Ontario was not allowed to ban a student from bringing a same-sex date to the school prom. The prom was held not to be part of the core religion message that the school was entitled to instill.

And in 2015, a transgender girl in Edmonton was found to have been discriminated against on the basis of her gender identity when she was precluded from using the girls’ washroom and was made to use an “individual” washroom.

‘Inclusion should trump exclusion,’ new book reminds 2SLGBTQ+ students the law is on their side 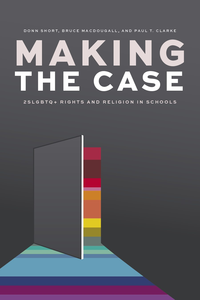 Making the Case: 2SLGBTQ+ Rights and Religion in Schools