Nanyang Technological University, Singapore (NTU Singapore) has launched the Quantum Science and Engineering Centre (QSec), which aims to develop devices and technologies powered by quantum science - the study of how particles behave at the atomic level.

The centre, the first of its kind in Singapore, will conduct research on developing and producing quantum chips using semiconductor fabrication technologies. These chips form the backbone of quantum devices such as quantum chip processors, networks, and sensors. They hold important applications in many areas such as quantum computing, communication, cryptography, cybersecurity, and sensor technology.

The Centre aims to train skilled manpower for quantum engineering, the application of quantum science to real-world scenarios, and to promote and develop Singapore’s quantum industry. It will collaborate with the Centre for Quantum Technologies (CQT), a Research Centre of Excellence established since 2007, on quantum technology research and engineering application, and look to establishing an international platform to collaborate with other overseas partners.

Education Minister Mr Chan Chun Sing said: “Quantum science, technologies, and engineering have drawn huge investments worldwide. Singapore is a long-standing investor in its potential and remains at the forefront of this field. In 2018, the National Research Foundation started a quantum engineering programme with the goal of establishing a competitive quantum engineering research community and industry ecosystem to translate the technology into real-world applications. We look forward to the Quantum Science and Engineering Centre’s (QSec) contributions to Singapore’s efforts in advancing quantum technologies, especially in the development of quantum computing chips and quantum communications.”

NTU President Professor Subra Suresh said: “The Quantum Science and Engineering Centre (QSec) aims to conduct ground-breaking research in several areas: quantum key distribution chips, quantum computation, quantum and classical neural network, cluster state computation and quantum sensing. NTU’s focus in these areas is part of our strategy to be a key enabler in the development of quantum science technologies to support Singapore’s efforts in quantum engineering for the benefit of industry and society.”

Centre co-director Professor Liu Ai Qun from NTU’s School of Electrical and Electronic Engineering said: “The Quantum Science and Engineering Centre (QSec) aims to not only take up a key role in supporting the local quantum industry, but to also build up strong international collaboration in quantum technologies which will benefit Singapore.”

Fellow centre co-director Dr Kwek Leong Chuan, a principal investigator at the Centre for Quantum Technologies (CQT) hosted at the National University of Singapore, said: “The Centre hopes to enhance Singapore’s impact on quantum science, engineering, and technologies by leveraging on our capability in chip-based devices. We are also hoping to train and enthuse more engineers and secondary school students in this emerging direction.”

One of the QSec’s main research projects is the development of a quantum computing chip that can perform quantum calculations using an integrated photonic chip, which can be made with semiconductor materials such as silicon wafer.

Such quantum processor chips hold the promise of solving complex calculations that are impossible for classical computers. Classical computers rely on binary bits as their building blocks, as all computational information can be reduced to either ones or zeros. Instead of using such bits, quantum processors use quantum bits, or qubits, which can exist in quantum states such that they represent both one and zero at the same time. This allows qubits to encode far more information than binary bits.

QSec researchers are exploring how photonics engineering – the science of applying, using, and manipulating light – can be used in a quantum context. While classical computers use electricity to flip the binary switches between their one and zero states, quantum chips, however, can use single particles of light (photons) to represent qubits.

By using lasers and beam splitters within a chip circuit, researchers can manipulate individual photons as qubits. This method, called boson sampling, uses light to perform quantum calculations which can far exceed the performance of supercomputers. Creating such a quantum photonic chip that can do this will open the possibility of bringing quantum computers into mainstream, real-world use.

These quantum computers will be able to rapidly solve calculations and tackle problems in diverse fields such as financial modelling, transport optimisation, and artificial intelligence and machine learning.

The most well-known developed application of quantum cryptography is quantum key distribution (QKD), a method that allows two remote users — who are embedded in an untrusted network such as the Internet — to exchange secret keys in the presence of an attacker who may own unlimited computing resources.

QSec researchers have managed to develop a quantum communication chip small enough to fit into everyday devices such as laptops or smartphones, which could lead to highly secure, encrypted communication.

It also offers outreach activities for secondary and upper-secondary school students in quantum technologies, especially in chip-based engineering and technology, and its researchers have given educational talks to various schools.

Mr Chan said: “We welcome the Centre’s outreach activities in secondary and tertiary education institutions, which helps to boost interest in the field among our aspiring scientists, engineers and researchers.”

QSec marks an important chapter for NTU’s 2025 Strategic Plan, as the University expands and enriches its innovative research and postgraduate educational offerings. QSec’s high-level research in quantum engineering will translate into innovative solutions and technologies that will benefit industry and society through partnerships. 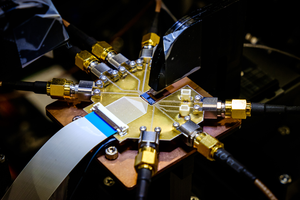