By chemically analyzing sequential samples from the baleen of dead whales, it is possible to read not only the history of the diet, but also the migration route of the animals. In the latest issue of the journal Royal Society Open Science, NIOZ researcher Philip Riekenberg and colleagues from Utrecht University and Wageningen Marine Research present their results of a novel way of analyzing nitrogen isotopes in animal tissue. "In this study, we have shown for the first time that you can take measurements of individual amino acids across the length of a baleen, to reconstruct in great detail the history of the animal", marine geochemist Marcel van der Meer of NIOZ, and one of the coordinators of the study says.

Grows like a hair
For his research, Riekenberg drilled powdered samples from individual baleens from beached whales, or animals that were found dead on the bow of a ship coming into harbor. Those baleens are plate-like structures that sit like a curtain on the upper jaw of whales from the suborder Mysticeti or baleen whales. After taking a mouthful of seawater, baleen whales squeeze the water back out, leaving food, such as krill behind ‘in the curtains’.

Baleens are made of horn-like material and, like hair or nails, grow at a fixed rate, in this case 10 to 16 cm per year. The further away from the whale's upper jaw, the further back in time the baleen was formed. And because ‘a whale is what it eats’, Riekenberg and colleagues wanted to investigate how exactly to reconstruct information about its diet or foraging location on Earth.

Isotopes
For their study they looked at, among other things, the various isotopes of nitrogen. In addition to the most abundant 'nitrogen-14' there is also a heavier version, 'nitrogen-15' that has an extra neutron. When an animal digests plankton, part of the protein from the plankton is used to create the animal’s own proteins. In this process, the concentration of the heavy nitrogen increases a little at each step in the food chain. As a result, animals higher up the food chain contain more and more nitrogen-15. Plankton contains less of the heavy nitrogen-15,than krill, which in turn contains less of the heavy nitrogen than fish that eat krill, and so on.

But even in different places on Earth, the concentrations of nitrogen-15 are not equal: the higher north in the Atlantic ocean you go, the heavier nitrogen becomes in the water and thus in plankton.

The trophic vs source amino acid difference appeared to be constant across the baleen, meaning that these individuals ate at the same level in the food chain the whole period their baleen was formed.  Thus, the differences in nitrogen isotopes in the baleen had to be a ‘geographic effect’, recording the presence of the whales in waters with different nitrogen composition.

Analyzing the layers from the baleens, Riekenberg indeed observed annual migration patterns between the Arctic and North Atlantic oceans. The concentration of nitrogen-15 in the layers of the baleens varied from relatively high to low and back again during that period.

Proof-of-principle
Van der Meer is excited about the results of this study. "We have shown that it is possible to analyze individual amino acids and extract very detailed information from them. In the first instance, this was mainly a proof-of-principle. But in the future, we may be able to find out not only what a beached whale has eaten but also where it has been swimming in recent months, which can help to identify migration pathways for threatened populations. That information can even still be extracted from whales in museum collections. This may be useful in identifying longer term changes in diet and migrations due to human impacts.”

Reconstructing the diet, trophic level, and migration pattern of Mysticete whales based on baleen isotopic composition. 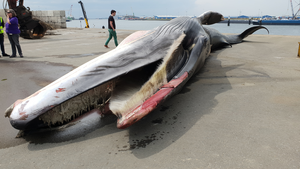 A bow caught fin whale showing the baleen on the upper jaw. 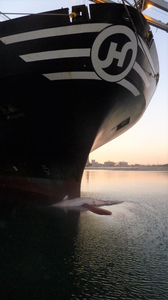