By Monica Hernandez and William Schulz

The experiments at AQT were performed on a four-qubit superconducting quantum processor. The researchers demonstrated that RC can suppress one of the most severe types of errors in quantum computers: coherent errors.

Akel Hashim, AQT researcher, involved in the experimental breakthrough and a graduate student at the University of California, Berkeley explained: “We can perform quantum computations in this era of noisy intermediate-scale quantum (NISQ) computing, but these are very noisy, prone to errors from many different sources, and don’t last very long due to the decoherence – that is, information loss – of our qubits.”

Coherent errors have no classical computing analog. These types of errors are systematic and result from imperfect control of the qubits on a quantum processor, and can interfere constructively or destructively during a quantum algorithm. As a result, it is extremely difficult to predict their final impact on the performance of an algorithm.

Although, in theory, coherent errors can be corrected or avoided through perfect analog control, they tend to worsen as more qubits are added to a quantum processor due to “crosstalk” among signals meant to control neighboring qubits.

First conceptualized in 2016, the RC protocol does not try to fix or correct coherent errors. Instead, RC mitigates the problem by randomizing the direction in which coherent errors impact qubits, such that they behave as if they are a form of stochastic noise. RC achieves this goal by creating, measuring, and combining the results of many logically-equivalent quantum circuits, thus averaging out the impact that coherent errors can have on any single quantum circuit.

Hashim used the analogy of the signal-to-noise ratio in astronomy to compare the impact of coherent errors versus stochastic noise in quantum computing. The longer a telescope operates, the more the signal will grow with respect to the noise, because the signal will coherently build upon itself, whereas the noise—being incoherent and uncorrelated—will grow much more slowly.

The AQT team collaborated closely with the original creators of the protocol, Joseph Emerson and Joel Wallman, who co-founded the company Quantum Benchmark, Inc. (recently acquired by Keysight Technologies) to tackle the problem of benchmarking and mitigating errors in quantum computing systems.

“Not having to design the software ourselves to perform the RC protocol ultimately saved us a lot of time and resources and freed us to focus on the experimental work,” Hashim said.

By bringing in researchers and partners from across the quantum information science community in the United States and the world, AQT enables the exploration and development of quantum computing based on one of the leading technologies, superconducting circuits.

“RC is a universal protocol for gate-based quantum computing, which is agnostic to specific error models and hardware platforms,” Hashim described. “There are many applications and classes of algorithms out there that may benefit from the RC. Our collaborative research demonstrated that RC works to improve algorithms in the NISQ era, and we expect it will continue to be a useful protocol beyond NISQ. It is important to have this successful demonstration in our toolbox at AQT. We can now deploy it on other testbed user projects.”

I. H, J. J. W., and J. E. have a financial interest in Quantum Benchmark, Inc. and the use of True-Q software. The other authors declare no competing interests. 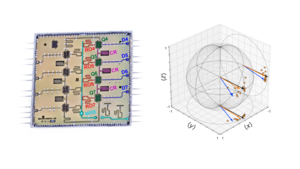 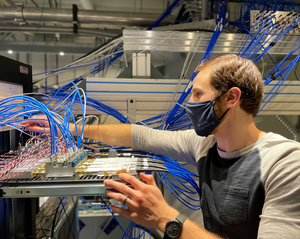