The invasive mosquitofish (Gambusia holbrooki) chews off the tails of freshwater fishes and tadpoles, leaving the native animals to perish while dining on other fishes’ and amphibians’ eggs. In a study published December 16 in the journal iScience, researchers engineered a robot to scare mosquitofish away, revealing how fear alters its behavior, physiology, fertility—and may help turn the tide against invasive species.

To fight the invasive fish, the international team, composed of biologists and engineers from Australia, the U.S., and Italy, turned to its natural predator—the largemouth bass (Micropterus salmoides)—for inspiration. They crafted a robotic fish that mimics the appearance and simulates the movements of the real predator. Aided by computer vision, the robot strikes when it spots the mosquitofish approaching tadpoles of an Australian species (Litoria moorei), which is threatened by mosquitofish in the wild. Scared and stressed, the mosquitofish showed fearful behaviors and experienced weight loss, changes in body shape, and a reduction in fertility, all of which impair their survival and reproduction.

“Mosquitofish is one of the 100 world’s worst invasive species, and current methods to eradicate it are too expensive and time-consuming to effectively contrast its spread,” says first author Giovanni Polverino (@GioPolverino) of the University of Western Australia. “This global pest is a serious threat to many aquatic animals. Instead of killing them one by one, we’re presenting an approach that can inform better strategies to control this global pest. We made their worst nightmare become real: a robot that scares the mosquitofish but not the other animals around it.”

In the presence of the robotic fish, mosquitofish tended to stay closer to each other and spend more time at the center of the testing arena, hesitant to tread uncharted waters. They also swam more frenetically, with frequent and sharp turns, than those who haven’t met the robot. Away from the robot and back in their home aquaria, the effect of fear lasted. The scared fish were less active, ate more, and froze longer, presenting signs of anxiety that continued weeks after their last encounter with the robot.

For the tadpoles the mosquitofish usually prey on, the robot's presence was a change for the better. While the mosquitofish is a visual animal that surveys the environment mainly through its eyes, tadpoles have poor eyesight: they don’t see the robot well. “We expected the robot to have neutral effects on the tadpoles, but that wasn’t the case,” says Polverino. Because the robot changed the behavior of the mosquitofish, the tadpoles didn’t have predators at their tails anymore and they were more willing to venture out in the testing arena. “It turned out to be a positive thing for tadpoles. Once freed from the danger of having mosquitofish around, they were not scared anymore. They’re happy.”

After five weeks of brief encounters between the mosquitofish and the robot, the team found that the fish allocated more energy towards escaping than reproducing. Male fish’s bodies became thin and streamlined with stronger muscles near the tail, built to cut through the water for fleeing. Male fish also had lower sperm counts while females produced lighter eggs, which are changes that are likely to compromise the species’ survival as a whole.

“While successful at thwarting mosquitofish, the lab-grown robotic fish is not ready to be released into the wild,” says senior author Maurizio Porfiri of New York University. The team will still have to overcome technical challenges. As a first step, they plan to test the method on small, clear pools in Australia, where two endangered fish are threatened by mosquitofish.

“Invasive species are a huge problem worldwide and are the second cause for the loss of biodiversity,” says Polverino. “Hopefully, our approach of using robotics to reveal the weaknesses of an incredibly successful pest will open the door to improve our biocontrol practices and combat invasive species. We are very excited about this.”

iScience (@iScience_CP) is an open access journal from Cell Press that provides a platform for original research and interdisciplinary thinking in the life, physical, and earth sciences. The primary criterion for publication in iScience is a significant contribution to a relevant field combined with robust results and underlying methodology. Visit: http://www.cell.com/iscience. To receive Cell Press media alerts, contact press@cell.com

Ecology of fear in highly invasive fish revealed by robots 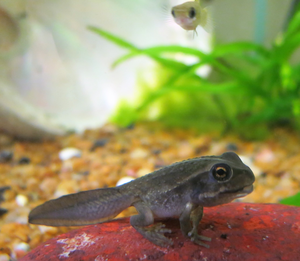 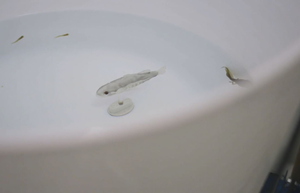 Robotic fish, mosquitofish and tadpoles in a testing arena