MINNEAPOLIS / ST. PAUL (12/07/2021) — If you ever wanted to be an astronomer, now is your chance. A new citizen science project, led by researchers at the University of Minnesota with support from NASA, allows volunteers to play an important role in learning more about the Sun by using their personal computers.

Participants will help identify bursts of plasma coming off the Sun, called solar jets, in thousands of images captured over the last 11 years by NASA’s Solar Dynamic Observatory.

The project, called Solar Jet Hunter, is the newest citizen science project under the Zooniverse platform originated at the University of Minnesota. Zooniverse is the world’s largest and most popular people-powered online research platform with more than two million volunteers from around the world. These volunteers act as armchair scientists and archivists helping academic research teams with their projects from the comfort of their own homes.

In this project, citizen scientists will detect solar jets by looking at short movies made from a sequence of still images. They decide if a solar jet is visible in any of the movies and provide information about the jets by annotating the images where solar jets are found. By building a database of solar jets, the volunteers help narrow down the vast amount of data about the Sun to the most important information for further review by solar researchers.

“These solar jets are sort of like a million hydrogen bombs going off on the star that’s actually not that far away from us, so it is important that we try to understand more about how that happens,” said Lindsay Glesener, a University of Minnesota associate professor of physics and astronomy. “But with our small research team, it would probably take a decade or more to look through all these images ourselves so we’re asking for help.”

The team decided that the project would be perfect for the Zooniverse citizen science platform.

“Solar jets are very difficult to identify in any sort of automatic way,” said Sophie Musset, a research fellow at the European Space Agency and former University of Minnesota postdoctoral researcher who is leading the Solar Jet Hunter project. “You can’t just write a piece of code that will tell the computer to search and find all of the solar jets, but it's very easy to see with human eyes.”

Musset and Glesener said the information they get from the citizen scientists will not only be used to study the Sun but will also help to write a computer algorithm that could speed future identification of solar jets by combining computer help with human expertise.

Glesener also said that the University of Minnesota was the perfect place for solar research and citizen science to come together.

“We have both the expertise in studying solar jets and the Zooniverse team here at the University of Minnesota,” Glesener said. “You can’t just throw some random images up on a website and expect that you're going to get the information from the citizen scientists that you need. It takes people who really know how to make it work.”

Lucy Fortson, a fellow University of Minnesota physics and astronomy professor and one of the founders of the Zooniverse platform, is one of those experts.

“While Zooniverse has been involved in all kinds of citizens projects from the humanities to biology, this project brings us back to our astrophysics roots,” Fortson said. “Our partnership with NASA and the Adler Planetarium has expanded our capacity to take on important projects like this one and increased the acceptance of citizen science as a valid research methodology within the scientific community. This is real proof that citizen science has come of age as a research tool.”

In addition to Musset, Glesener, and Fortson, the Solar Jet Hunter international research team includes co-investigators Gregory Fleishman, a professor in the Center for Solar-Terrestrial Research at the New Jersey Institute of Technology; and Navdeep Panesar, a research scientist at Lockheed Martin Solar & Astrophysics Laboratory and Bay Area Environmental Research Institute. Other members of the team include Erik Ostlund, a Zooniverse web developer at the University of Minnesota; Suhail Alnahari, a data scientist in the University of Minnesota’s School of Physics and Astronomy; University of Minnesota graduate students Yixian Zhang and Charlie Kapsiak; Mariana Jeunon, graduate student at Catholic University of America in Washington, D.C.; and Paloma Jol, a master student at Leiden University in The Netherlands.

The Solar Jet Hunter citizen science project is funded by NASA under the Heliophysics Guest Investigators program, and has supported students under a U.S. National Science Foundation CAREER grant.

To join the project, go to the Solar Jet Hunter website.

In 2020, the University of Minnesota announced a partnership with NASA and Chicago’s Adler Planetarium, along with its Zooniverse team, to leverage world-leading expertise across organizations to advance citizen science capabilities and achievements. As part of this new partnership agreement, NASA pledged two years of support for the Zooniverse team at the Adler Planetarium and the University of Minnesota. This funding contributes to Zooniverse’s efforts to develop and maintain its cutting-edge research platform.

You can help scientists study the Sun 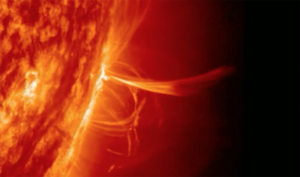 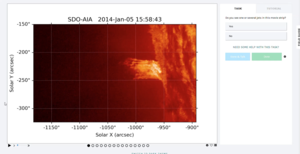