Tokyo, Japan – Your teeth are like tiny time capsules—they have the potential to provide a wealth of information to scientists centuries in the future. For example, if you allow your plaque to harden into dental calculus (also known as tartar), it could preserve the genetic material of your oral microbiome: the bacteria that call your mouth home.

In a new study published in Frontiers in Cellular and Infection Microbiology, a research team from Tokyo Medical and Dental University (TMDU) investigated the teeth of 12 human skeletons from Edo-era Japan (1603–1867), collected in 1955 from a former graveyard in Tokyo.

The goals of this study were to identify signs of periodontitis (commonly called gum disease) in these ancient skeletons, analyze the bacterial genomes preserved in the dental calculus, and compare the Edo-era oral microbiomes to their equivalents in modern samples.

To investigate relationships between the identified bacteria and periodontitis, the researchers developed a new method to diagnose periodontal disease in ancient skeletons. Study first author Takahiko Shiba explains, “Previously, teeth would need to be extracted from the jawbone to determine the root length and quantify bone loss as an indicator of periodontal disease. However, with advancements in micro-computed tomography technology, we were able to accurately quantify bone loss without removing teeth from the skeletons.”

Unexpectedly, the researchers detected periodontal disease in 5 of the 12 Edo-era skeletons (42%), thus the prevalence of gum disease among individuals in the Edo era appears to have been similar to that in the modern era; 37.3% of Japanese people in their forties were found to suffer from gum disease in 2005.

According to another corresponding author, Hiroaki Kobayashi, “The Edo era of Japan is noted for its strict isolationist foreign policy, with very little interaction between Japanese people and foreigners. This policy appeared to be reflected in the oral microbiomes we studied, which were distinct from modern and ancient Western counterparts. Thus, our study sheds new light on the evolution of the oral microbiome and on periodontal pathogenesis.”

The article, “Comparison of periodontal bacteria of Edo and modern periods using novel diagnostic approach for periodontitis with micro-CT,” was published in Frontiers in Cellular and Infection Microbiology at DOI: 10.3389/fcimb.2021.723821

Frontiers in Cellular and Infection Microbiology

Drilling into the dental secrets of Edo-era Japanese bacterial genomes 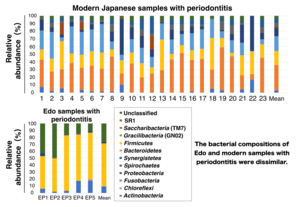 Figure 2. Bacterial composition at the phylum level based on 16S rDNA sequencing in Edo and modern samples with periodontitis.

Figure 3. Bacterial networks based on the co-occurrence relationships among bacterial species.