New research shows that simple changes to how UK solar parks are managed could boost ground nesting bumble bee populations in the parks and surrounding areas, providing an additional benefit on top of renewable energy.

These preliminary results will be presented at Ecology Across Borders on Monday 13 December by Hollie Blaydes, a PhD researcher at Lancaster University.

They also found that large, elongated and resource-rich solar parks could boost bumble bee density up to 1km outside of the parks themselves, delivering pollinator services to crops in surrounding agricultural land.

Hollie Blaydes said: “Our findings provide the first quantitative evidence that solar parks could be used as a conservation tool to support and boost pollinator populations. If they are managed in a way that provides resources, solar parks could become valuable bumble bee habitat.

“In the UK, pollinator habitat has been established on some solar parks, but there is currently little understanding of the effectiveness of these interventions. Our findings provide solar park owners and managers with evidence to suggest that providing floral and nesting resources for bumble bees could be effective.”

Boosted bumble bee numbers in solar parks could also provide potential benefits to nearby crops through enhanced pollinator visitation. Farmers who have solar parks on or nearby their land, could choose to plant pollinator-dependent crops close to these pollinator dense areas.

In the UK, solar parks are often located within intensively managed agricultural landscapes, raising the potential of solar parks as refuges for bumble bees.

The area of land used for solar parks in the UK is also growing, increasing the potential to harness this land for additional benefits. Ground-mounted solar parks currently take up 14,000 hectares. For the UK to meet net zero targets, the Climate Change Committee projects that there will need to be an additional 54GW of solar photovoltaic, meaning a land use change of 90,300 hectares for solar parks.

There are barriers to solar parks being managed in ways that benefit bumble bees and other wildlife. For instance, there are costs associated with establishing and managing habitats for pollinators and there are currently no economic incentives for the solar industry to do this. It’s hoped that the post-Brexit agricultural bill payments for ecosystem services could provide a mechanism for this.

Business structures could also prove to be a hinderance. Hollie Blaydes explains: “Management of solar parks is often outsourced to external companies where contracts are typically around two years long. This, along with frequent changes in ownership, means that management regimes could be changed as the solar park or management contract changes hands. This could be challenging when trying to establish and maintain habitats over longer time scales.”

In the study, in order to understand how solar park management could impact bumble bee density within solar parks and surrounding areas, the researchers used a geographic information system (GIS) to create solar parks of different sizes, shapes and management approaches based on real UK examples in real UK landscapes.

This GIS was combined with a state-of-the-art pollinator model called Poll4Pop which predicted bumble bee density and nest density inside the solar parks and surrounding buffer zones.

They then used statistical analyses to investigate differences in bumble bee density and nest density across the different solar parks in the model.

To test the findings from their model, the researchers call for data to be collected on real-world solar parks to better understand pollinator response to management schemes.

The researchers specifically looked at ground nesting bumble bees and did not consider other important pollinators such as solitary bees, hoverflies, butterflies and moths. The different resources and foraging behaviours of these groups would require alternative modelling approaches to understand how they might benefit from solar park management.

Hollie Blaydes will present the work at Ecology Across Borders. This work is unpublished and is currently under review. This conference will bring together over 1000 ecologists to discuss the most recent breakthroughs in ecology. 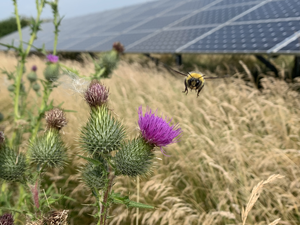