EL PASO, Texas (Dec. 9, 2021) — Thomas Boland, Ph.D., UTEP professor of biomedical engineering and a bioprinting pioneer known widely as the grandfather of modern inkjet bioprinting, has been named a Fellow of the National Academy of Inventors (NAI). Being elected as an NAI Fellow is the highest professional distinction awarded solely to academic inventors.

Boland, who filed the first patent for printing cells in 2003, is the third UTEP faculty member to be named an NAI Fellow. The honor was announced this week in recognition of Boland’s innovation in creating or facilitating outstanding inventions that have made a tangible impact on quality of life, economic development and the welfare of society. He will be formally inducted during the 11th annual Meeting of the National Academy of Inventors in June 2022 in Phoenix, Arizona.

“We are pleased but not surprised to learn of Dr. Boland’s election as NAI Fellow, said Roberto Osegueda, Ph.D., vice president for research. “His work is outstanding. Like Dr. Boland, our UTEP faculty is comprised of accomplished researchers, inventors and educators who advance discovery as part of our mission as a leading national research university.”

Boland’s research interests include applying engineering principles to automate, predict and build three-dimensional structures that show biological function. His groundbreaking innovations use inkjet printers to assemble cells and biomaterials into viable and functioning structures. He leads The Biomedical Device, Delivery, and Diagnostic lab, which brings together students from various engineering and science disciplines for several large-scale interdisciplinary projects.

“I am deeply honored to receive this national distinction from the National Academy of Inventors,” Boland said. “I look forward to continuing to work on 3D printing innovations, and spinning off companies that will help solve medical challenges for the benefit of all of humanity.”

About The University of Texas at El Paso

The University of Texas at El Paso is America’s leading Hispanic-serving university. Located at the westernmost tip of Texas, where three states and two countries converge along the Rio Grande, 94% of our more than 24,000 students are minorities, and half are the first in their families to go to college. UTEP offers 169 bachelor’s, master’s and doctoral degree programs at the only open-access, top tier research university in America. 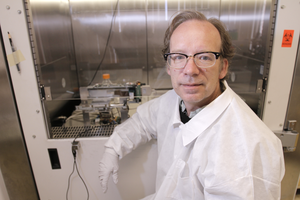