Nearly a century after Italian physicist Ettore Majorana laid the groundwork for the discovery that electrons could be divided into halves, researchers predict that split photons may also exist, according to a study from Dartmouth and SUNY Polytechnic Institute researchers.

The finding that the building blocks of light can exist in a previously-unimaginable split form advances the fundamental understanding of light and how it behaves.

The theoretical discovery of the split photon –  known as a “Majorana boson” – was published in Physical Review Letters.

“This is a major paradigm change of how we understand light in a way that was not believed to be possible,” said Lorenza Viola, the James Frank Family Professor of Physics at Dartmouth and senior researcher on the study. “Not only did we find a new physical entity, but it was one that nobody believed could exist.”

Similar to how liquid water can change into ice or vapor under specific conditions, the research indicates that light can also exist in a different phase – one where photons appear as two distinct halves.

“Water is water regardless of its liquid or solid form. It just behaves differently depending on physical conditions,” said Viola. “This is how we need to approach our understanding of light—like matter, it can exist in different phases.”

Rather than pieces that can be physically pulled apart, the photon halves serve similar to the different sides of a coin. The two distinct parts make up a whole, yet they can be described and function as separate units.

“Every photon can be thought of as the sum of two distinct halves,” said Vincent Flynn, a PhD candidate at Dartmouth and first author of the paper. “We were able to identify conditions for isolating these halves from one another.”

The research is based on the fundamentals of physics.

Particles come in two different types: fermions and bosons. Fermions, such as electrons, tend to be solitary, avoiding each other at all costs. Bosons, such as photons, tend to bunch together. Thus, it was natural for researchers to assume that splitting bosons would be an insurmountable task.

The Dartmouth theory relies on energy-leaking, dissipating cavities that are coupled together and filled with quantum packets of light. The research predicts that particle halves appear at the edges of such a synthetic platform: The Majorana boson was discovered.

“Our discovery provides the first hint that a previously unknown, topological phase of light and matter which hosts Majorana bosons may exist,” said Flynn.

The theoretical finding builds on the prediction in 1937 of the existence of neutral, electron-like particles known as Majorana fermions. In 2001, researchers suggested a specific process for how electrons could actually be halved in certain superconductors. But the photon had remained indivisible until now.

According to the research team, Majorana bosons can be viewed as distant relatives to Majorana fermions.

“Fermions and bosons are as different as two things can be in physics,” said Emilio Cobanera, assistant professor of physics at SUNY Polytechnic Institute, and co-author of the study. “In effect, the particles are distorted images of each other. The existence of the Majorana fermions was our main clue that the Majorana boson was hiding somewhere in the funhouse mirror.”

The team found that Majorana bosons are robust against experimental imperfections and identifiable by distinct signatures. Although it is hard to predict how the findings may be applied, those characteristics could support the development of new types of quantum information processors, optical sensors, and light amplifiers. The research also points the way toward uncovering a new, exotic phase of matter and light.

“In order to make this discovery we had to challenge long-held beliefs and really think outside the box,” said Viola. “We have split something previously thought to be unsplittable, and we’ll never look at light the same way.” 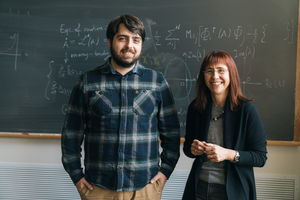