RIVERSIDE, Calif. -- The University of California, Riverside, is the lead institution of a grant from the Department of Energy, or DOE, to use machine learning techniques to optimize the design of the ATHENA detector, one of the proposed experiments for the future Electron-Ion Collider, or EIC. The research team, which includes members from the Lawrence Livermore National Laboratory and Lawrence Berkeley National Laboratory, was awarded a total of $980,000.

The EIC is a major new nuclear physics research facility that will be constructed at Brookhaven National Laboratory in Upton, NY. It will explore mysteries of the “strong force” that binds the atomic nucleus together.

The $280,000 grant to UCR is for two years. It will allow Miguel Arratia and Kenneth Barish to contribute to the team’s goal of co-optimizing software and hardware, which would help achieve “co-design,” a known concept in computing and machine learning research but new to nuclear physics.

“The EIC represents a flagship project for the future of nuclear physics, providing an unprecedented opportunity to deploy artificial intelligence techniques in the design stage of large-scale experiments,” said Arratia, an assistant professor of physics and astronomy and the grant’s principal investigator, or PI. “Moreover, we will deliver a framework that will be applicable for the design of any experiments that rely on a simulation package called Geant4, which constitutes the backbone for detector designs in particle and nuclear physics, medical physics, and space science.”

“Our students will spend a significant portion of their time there, working with lab physics and computing science experts, and learning about their high-performance computing infrastructure,” said Barish, a professor of physics and astronomy and the grant’s co-PI. “The students will also gain exposure to the artificial intelligence work developed in this project as well as other applications in nuclear physics.”

Design driven by artificial intelligence, or AI, is an emerging field for the EIC. 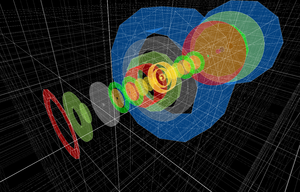