Eavesdropping doesn’t just belong in the playbooks of police officers and spies. It is also a phenomenon that plays out among animals. Previous studies have shown that certain species, especially birds, listen to each other for warnings of nearby predators. But a new study from the University of Copenhagen reveals that a variety of mammals eavesdrop on one another when it comes to finding food.

Two biologists from the Natural History Museum of Denmark, Linnea W. Havmøller and Rasmus W. Havmøller, spent nine months in a Panamanian rainforest studying how coatis and agoutis, among other forest mammals, cash in on the messy table manners of monkeys.

"Monkeys are messy eaters. After just a few bites of a fruit, they let it fall to the ground. Other species benefit from this habit. But to do so most effectively, they need to know where and when the monkeys are eating. Here, our study demonstrates that mammals use eavesdropping," says the study’s lead author, Linnea W. Havmøller, a Smithsonian Fellow and doctoral student at the University of Copenhagen’s Natural History Museum of Denmark.

The eavesdropping consists of the fact that terrestrial fruit-eating mammals – in this case, coatis and agoutis, listen in when capuchin and spider monkeys eat fruits up in trees. The arboreal monkeys’ often- dropped, half-eaten fruit falls and becomes a tasty treasure for the terrestrial creatures below.  And these animals are ready to move in as soon as they hear the sound of fruit falling to the ground.

"It is clear that, when terrestrial animals hear monkeys in a tree, they head towards that tree. It’s as if their ears are telescoped, which lets them hear the lunch bell from wherever it’s ringing. This gives them access to food that would otherwise be inaccessible at the time," explains Rasmus W. Havmøller, a postdoctoral researcher at the Natural History Museum of Denmark.

According to the researchers, the eavesdropping strategy is not just a convenient way to get a little extra food for themselves – it can play a vital role for animals. In Panama, there is a period of time each year when almond trees alone produce the majority of food for a great many species – including those four studied by the researchers.

"During this season, there is incredibly little to eat in the forest – other than the prodigious quantities of fruit from this one type of tree. However, terrestrial animals can’t access these fruits unless monkeys drop them. For these animals, the eavesdropping method means that they gain access to food in greater quantities and far sooner than the long time it would take if the fruits were left to fall on their own. And during some periods, it is crucial for their food gathering," says Linnea W. Havmøller.

"In the bigger picture, this means that in areas where monkeys have been removed from the local environment – typically as a result of hunting or destroyed forest – there can be a large and negative cascade effect. Not only will the species of mammals which depend on the fruit being dropped by monkeys suffer – there can be an impact on the entire rainforest ecosystem because terrestrial fruit-eating animals help disperse the seeds that allow the forest to reproduce."

While previous observations of the eavesdropping phenomenon have been recorded by pen and paper – and are at risk of misinterpretation – the UCPH researchers adopted a variety of technologies. They collected data using GPS collars, camera traps, speakers playing monkey sounds, and traps that collected fallen fruit.

Data from the study show that over 90% of the fruit which landed in the traps had bite marks and was half-eaten by monkeys, and that the fruit that fell outside the traps was eaten almost immediately.

“I think we've underestimated how much mammals interact with each other and how many ways they're actually connected. Eavesdropping between species is a new chapter in the behavioural biology of mammals, which provides us with important knowledge about how much the disappearance of one species can impact an entire ecosystem," concludes Rasmus W. Havmøller.

HOW THEY DID IT:

The corresponding author confirms on behalf of all authors that there have been no involvements that might raise the question of bias in the work reported or in the conclusions, implications, or opinions stated. 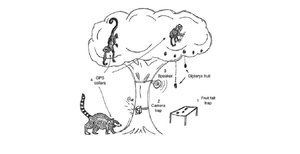