The expansion of solar energy is a necessity to sustainably meet the world’s energy demands. To achieve this, researchers have focused on the development of semiconducting energy materials. One such material, hybrid perovskites, consists of both organic and inorganic ions. These are promising candidates to form the next generation of solar cells, which could be more cost effective and more easily mass produced than the conventional ones currently available.

But, before they can be commercialized, their efficiency needs to be expanded and their limits properly understood. Writing in Energy & Environmental Science, researchers from the Femtosecond Spectroscopy Unit, led by Professor Keshav Dani, at the Okinawa Institute of Science and Technology Graduate University (OIST) and Optoelectronics Materials and Device Spectroscopy Group, led by Dr Sam Stranks at the University of Cambridge identified three different kinds of defect clusters in state-of-the-art perovskite thin films, which likely form during the perovskite’s fabrication and may impede efficiency.

“If you have a solar cell, you want the whole material to contribute to converting sunlight to electricity, otherwise you are not utilizing its full potential, which is not desirable for commercial purposes,” said Sofiia Kosar, PhD candidate in the OIST Unit and first author of the research paper.

“If there are defects within the material this might impact the generation of electron-hole pairs or their collection at contacts and mean that the perovskite solar cell loses efficiency,” Sofiia said. She went on to explain that, theoretically, perovskite solar cells could convert about 30% of incident light to electricity. “Right now, hybrid perovskites regularly output between 20% and about 25%.”

Experts in the field were aware of the existence of defects that might impede efficiency, but it was previously unclear whether these defects all had the same characteristics and could thus be removed using one strategy. In this study, by using state-of-the-art equipment, the defects were imaged and characterized with a nanoscale resolution to reveal three distinct kinds.

The most detrimental kind the researchers found was the grain boundary defect. These defects are tiny and, as the name suggests, sit at the boundary between different crystal grains of perovskite. They seemed to actively trap photogenerated holes and deplete efficiency from the regions far exceeding their size, thus causing huge issues for the performance of the perovskite.

Then there are polytype defects. These occur when the precursor material crystallizes, not in the typical cubic perovskite structure, but a hexagonal one. This type of defect cluster is relatively big and also negatively impacts efficiency by trapping photogenerated holes.

Finally, the study revealed the lead iodide defects. These form from precipitated lead iodide—an important part of perovskite material that is used during the fabrication. However, this research suggests that they are benign in terms of trapping charges and have little impact on efficiency.

The researchers decided to use an approach that is often used to reduce defect density in perovskites—treatment with light and oxygen—to see how these defects would respond. They did this by exposing the perovskite to visible light and a mildly oxygenated atmosphere. Interestingly, they found that the defects reacted in different ways. For example, the most detrimental grain boundary defects were healed and stopped trapping the holes. However, the effect on the other defect types was more nuanced and not necessarily beneficial.

“This research shows that we likely need targeted approaches to address the undesired effects of the different defect types, and thus improve the performance of perovskite solar cells,” concluded Prof. Dani.

Zooming in on tiny defects 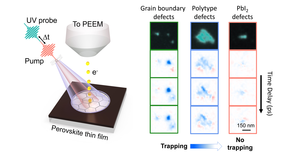 Trapping by three different types of defects in a perovskite