An international collaboration has demonstrated a novel topology arising from losses in hybrid light-matter particles, introducing a new avenue to induce the highly-prized effects inherent to conventional topological materials, which can potentially revolutionise electronics.

Led by Singapore’s Nanyang Technological University (NTU) and the Australian National University (ANU), the study represents the first experimental observation of a non-Hermitian topological invariant in a semiconductor in the strong light-matter coupling regime supporting formation of exciton-polaritons.

LOSING IS NOT ALWAYS LOSING

Losses, such as friction or electrical resistance, are ubiquitous in nature, but are seen as detrimental to devices.

In electronics, for example, resistance leads to heating and limits computing efficiency.

“However, this negative view about loss has significantly changed recently, thanks to advances in non-Hermitian physics, which have shown that losses can lead to striking effects not possible in a ‘perfect’ lossless world,” says Prof Elena Ostrovskaya from the Australian National University.

Taking advantage of analogy between quantum mechanics and classical wave physics, recent advances in photonics demonstrated that judicious control of losses can lead to counter-intuitive effects, such as lasers that turn on despite increasing loss, robust switching between lasing modes, and irreversible propagation of light.

Studies of non-Hermitian effects in quantum condensed matter systems, such as electronic materials, are less common.

Losses can induce nontrivial topology, turning a conventional material into a topological one.

If two materials with contrasting topology are merged, robust effects, such as dissipationless one-way transport, occurs at their interface.

In this study, the team mixed excitons (electronic excitations) in lead-halide perovskite semiconductor with photons to create exciton-polaritons.

“Typically, one needs exotic materials or sophisticated material engineering to induce topological behaviour. However, in this work, we discovered that the mere presence of loss in an exciton-polariton system based on lead-halide perovskite causes it to exhibit a nontrivial topology”, says Dr Eli Estrecho (ANU), one of the lead authors of the paper

The team carefully measured the energy and linewidths at different momenta and polarisations of polaritons in the system.

The energy and linewidths correspond to the real and imaginary parts of the complex energy of the lossy system in the language of non-Hermitian physics. And the two polarisation states give rise to two distinct energy bands in momentum space.

From this analysis, the team found the points where both real and imaginary parts of the two complex energy bands coincide. These are called exceptional points, and in this system they occur in pairs.

This would not have been possible if the linewidths were neglected, as was typically done in previous works.

Furthermore, the team found that the complex energies rotate with a defined handedness and phase around the exceptional points. In fact, the phase winds exactly by  as predicted by theory – this quantity is the new topological invariant that arises only in non-Hermitian systems.

“This is the first direct measurement of a non-Hermitian topological invariant associated with an exceptional point in momentum space of a condensed matter system,” says Dr Rui Su (Nanyang Technological University), one of the lead authors from study.

Furthermore, the team found that the winding of the wavefunctions and the energy bands are distinct from each other, confirming that they indeed observe a novel topology.

This work introduces a new avenue in designing topological materials, complementing conventional topology. Instead of avoiding loss, losses can be re-engineered or introduced intentionally to induce topological effects in an inherently non-topological system.

This could be instrumental in exploiting robust effects due to topology towards realizing a topological transistor in a lossy system.

The ANU group has previously used polaritons to observe non-Hermitian degeneracies called exceptional points and have shown chiral flow of polaritons due to these points.

However, these points were observed in parameter space.

This time around, the exceptional points are demonstrated in momentum space, which can directly affect the propagation of the particles, including polariton superfluids.

Direct Measurement of Non-Hermitian Topological Invariant in a Hybrid Light-Matter System was published in Science Advances in November 2021. (DOI 10.1126/sciadv.abj8905)

Wrocław University of Science and Technology and Tsinghua University are partner organisations of the ARC Centre of Excellence in Future Low-Energy Electronics Technologies (FLEET), whose ANU activities are directed by Prof Ostrovskaya. 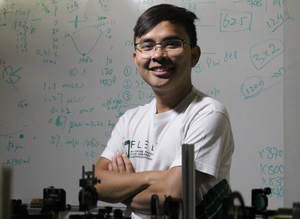 Winding of difference of complex bands around pair of exceptional points.