Tin sulfide (SnS) is an abundant, safe, and environmentally friendly solar cell material. This inexpensive material is forecast to be used in next-generation solar cell panels.

Conventional SnS thin films are usually p-type conductive. Thus, SnS thin-film solar cells have been fabricated using a pn heterojunction with p-type SnS thin film and other n-type semiconductor thin films, such as CdS. However, the conversion efficiency of such heterojunction devices has stagnated at approximately 5%, rendering their use impractical.

The SnS thin-film solar cells employing a pn homojunction, which uses SnS thin films for both p-type and n-type layers, is expected to exhibit higher conversion efficiency. Yet, n-type conducive SnS thin films without toxic elements have never been achieved before.

The results of the research were published in Physical Review Materials on December 9, 2021. 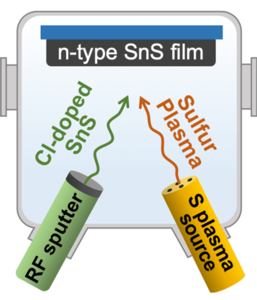