For more than a decade, two U.S. Department of Energy (DOE) national laboratories have joined forces to give graduate students valuable firsthand experience with powerful scientific instruments. The National School on Neutron and X-ray Scattering (NXS) invites 60 graduate students a year for lectures and guided experiments at Argonne National Laboratory and Oak Ridge National Laboratory. During these experiments, students gain practical experience scattering neutrons and X-rays off objects in order to learn more about the atomic structures, chemical makeup and other properties of those objects.

For the past two years, the students of the NXS were scattered across the country themselves. As a result of the COVID-19 pandemic, the school was held virtually in 2020 and 2021, with students logging in from all over North America. Organizers endeavored to give virtual attendees the same level of training and experience students have received from the program for more than two decades.

“The goal for both the labs is to get the best-trained users of the facilities,” said Stephan Rosenkranz, a senior physicist and group leader in Argonne’s Materials Science Division and co-director of NXS. ​“We can have the best facilities globally, but what use is it if we don’t have trained users?”

“I have read the textbook and done the math and have seen how calculations get done, but being able to see the structure on the screen after I shot some X-rays was an incredible experience, as it validated the education for me.” — Denzel Alaya, doctoral student, State University of New York at Buffalo.

Those facilities include three DOE Office of Science user facilities: the Advanced Photon Source (APS) at Argonne, one of the most powerful X-ray light sources in the world, and the Spallation Neutron Source (SNS) and the High Flux Isotope Reactor (HFIR) at Oak Ridge, both of which are intense sources of neutrons. Both X-rays and neutrons can be used to learn more about the properties of materials — scientists send X-rays or neutrons in narrow beams into materials, and those beams scatter off of the atoms of the samples, carrying valuable information about them into nearby detectors. That information can be used to create more efficient electronic devices and learn more about viruses, for example.

In order to gain hands-on experience using these techniques, students need access to the machines that enable them. Since there are only a few of those machines in North America, the NXS gives students a chance to conduct experiments at the APS, SNS and HFIR, honing their skills as they prepare for their scientific careers. The NXS is highly competitive with more than three times as many applicants than can be admitted due to capacity limits. A committee therefore selects 60 individuals to train at the facilities, based on qualification and merit described in the application instructions. Though solely merit-based, the yearly cohort of NXS participants is very diverse and covers a wide range of scientific areas.

The pre-pandemic period for this program was two weeks, and the students spent one at each lab. However, in 2020 the sessions went virtual due to the pandemic, and in 2021, organizers added a third week to the program.

Guided by the lessons they learned during their first virtual session in 2020, Argonne and Oak Ridge worked on improving this experience for 2021’s class. In order to provide experience in using the tools available at the facilities, students could analyze data and control the experiments both at Argonne and Oak Ridge while working on their computers in the comfort of their homes. For some of the experiments, Argonne also utilized virtual reality headsets — wearable tablets for remote collaboration — to provide the students a view of the APS and X-ray beamlines and controls through the experimenter’s eyes.

For the lectures, the students were instructed to study the prerecorded talks from last year ahead of time to allow live sessions where speakers could revisit the most important points, and students had ample time to ask questions. This flipped classroom concept, though demanding on students’ time, allowed for lively interactive lectures.

“I have read the textbook and done the math and have seen how calculations get done, but being able to see the structure on the screen after I shot some X-rays was an incredible experience, as it validated the education for me,” said Denzel Ayala, a doctoral student in materials science at the State University of New York at Buffalo who dreams of becoming a DOE-funded scientist in the future.

The team behind the NXS includes six co-directors at the two laboratories, working with Meredith Bruozas, manager of educational programs and outreach at Argonne. The co-directors work throughout the year to decide their resources, finalize the guest lectures and select the students. The NXS directors collaborate with an external advisory committee that includes professors, scientists and former NXS co-directors, who are all expert users of these facilities, to ensure the lectures and speakers cover the basics as well as emerging new topics in neutron and X-ray scattering.

The program offers reading materials and lectures to the students and groups them into small teams of four to work on experiments. The students collaborate with lab scientists on roughly 20 to 30 experiments each week of the program. Though the pre-pandemic sessions offered more face-to-face interactions, this year’s organizers used Gather, a virtual conference platform that allowed for students to develop avatars and have face-to-face engagement in a virtual world. Through Gather, students participated in an immersive and interactive poster session each week.

Symphony Huang, a graduate student in the department of physics and astronomy at McMaster University in Hamilton, Canada, enjoyed being a part of NXS in 2021. ​“The flipped classroom model allowed me to study the prerecorded lectures at my own pace, and I was able to use the classroom sessions to interact with the lecturers,” she said. ​“I felt we were all participating together, and this worked very well.”

With a combination of multiple platforms such as Slack, Zoom, Teams and Gather, students were able to make the best use of the virtual sessions and have an interactive and dynamic experience during their three weeks in the program.

“NXS offers the best chance to become part of a network with leading experts, experienced beamline scientists, and peers in the field, which is most important for a thriving career in science,” said Uta Ruett, physicist and group leader in Argonne’s X-ray Science Division and a co-director of NXS.

Ayala and Huang have only positive things to say about the program.

“I am now even more excited to pursue my research using neutron and X-ray scattering and its many complementary techniques, which will all come in handy when solving my scientific puzzles,” Huang said.

Ayala is excited about his future career trajectory. ​“It’s confirmed for me that these labs are the place I want my career to take me because they tackle a combination of fundamental science and practical application towards the climate crisis,” he said.

In addition, they now know how to write competitive proposals and apply for research time at these massive facilities to help solve their scientific questions.

“This is the biggest outreach program where students can learn to write strong proposals for beamtime, since they compete against experienced researchers and professors,” said Matthias Frontzek, an instrument scientist at Oak Ridge and a co-director of NXS.

This successful collaboration between two national laboratories illustrates how, even during the pandemic, a hands-on program can engage students and scientists to work together while accessing the world-class facilities that the labs offer. 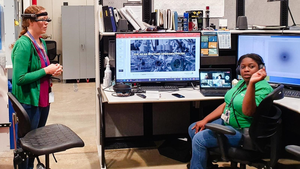 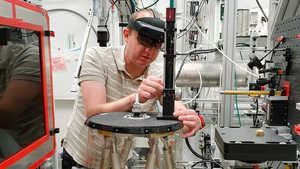