While scrolling through iNaturalist - a social network where professional and citizen scientists share their photographs, in order to map biodiversity observations from across the globe - a group of students from Croatia discovered a couple of curious pictures, taken in 2008 in the Peruvian rainforest and posted in 2018. What they were looking at was a pygmy grasshopper sporting a unique pattern of lively colors. The motley insect was nothing they have so far encountered in the scientific literature.

The scientist and photographer Roberto Sindaco, Museo Civico di Storia naturale (Torino, Italy) graciously shared his camera roll with Niko Kasalo, Maks Deranja, and Karmela Adžić, graduate students under the mentorship of Josip Skejo, all currently affiliated with University of Zagreb, Faculty of Science, Croatia. Together, they published a paper describing the yet to be named insect in the open-access scientific journal Journal of Orthoptera Research.

Typically, new species are described from specimens collected from their natural habitats and then deposited in a museum to be preserved for future reference. The authors, possessing several high-quality photographs, decided to challenge the norm and name the new species based on photographs only. The paper was initially rejected, but a compromise was reached—it could be published with the species name removed.

The International Code of Zoological nomenclature is a document that contains regulations for proper scientific naming of animal species. It allows naming species from photographs, but the practice is generally looked down upon. Thus, the authors decided to use the nameless species to draw attention to this problem and bring more clarity. Names in zoology consist of two words: the genus name and the species name. As the species name was denied, the grasshopper is now mysteriously referred to as „the nameless Scaria“.

Another important message of this paper is how citizen science portals, such as iNaturalist, allow everybody interested in nature to contribute to ‘real’ scientific work by posting their findings online.

The authors believe that including laypeople in the scientific process can help bridge the communication gap between scientists and the general population, dissipating the growing suspicion towards science. The researchers urge everybody to engage with nature around them and capture its beauty with their camera lens.

“Only by interacting with nature can we truly feel how much we might lose if we do not take care of it, and care is urgently needed,” said the study’s authors.

Discovering insect species based on photographs only: The case of a nameless species of the genus Scaria (Orthoptera: Tetrigidae) 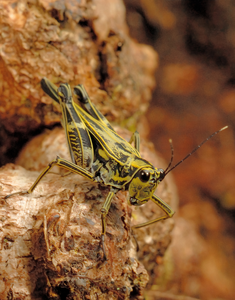 Female of the nameless Scaria species 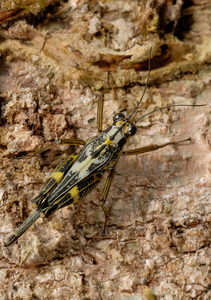 Male of the nameless Scaria species