Tokyo, Japan – Researchers from Tokyo Metropolitan University have developed a simulation predicting the spread of an invasive beetle species harming local flora. They tried models based on road lengths, river lengths and recorded cherry tree numbers in square “cells” over Saitama Prefecture. They found that a simple model based on river lengths gave results which compared favorably with real world data. Good predictions could help authorities channel limited resources to where they are most needed.

Invasive insect species are a direct threat to local wildlife. The damage they inflict not only affect local ecosystems, but economies as well. Some estimates put the total annual cost of biological invasions around the world at well over 100 billion US dollars. The plum longhorn beetle or Aromia bungii is no exception. Though common in eastern Asia, it was only first found in Japan in 2012. In the decade since, it has had a devastating impact on peach orchards and cherry trees, particularly the Somei Yoshino variety which adorns the beautiful Japanese spring landscape. Not only has the invasion hit agriculture, it threatens the spring tourism industry for areas known for their abundant cherry trees.

One of the key aspects of managing such pests is knowing where they will spread to each year. Despite a range of technological innovations over the years like special traps, there are always limited resources that can be deployed: local authorities need to know where to focus on. That’s why a team led by Associate Professor Takeshi Osawa have been working on computer simulations to predict where beetles will go. They looked at Saitama Prefecture, where these beetles have become a major problem in recent years.

The cellular automata simulation they used splits the landscape up into squares, with rules dictating how likely it is that beetles spread from cell to cell in different directions. The team knew how much the beetles tended to crop up in areas with cherry trees. Thus, they decided to set the rules based on three different variables; the number of cherry trees on record in each square, the total length of rivers, and the total length of roads, since both rivers and roads tend to have cherry trees along them. They then ran the simulations, looking for areas with high levels of virtual invasions, and compared them with real-life observations of the beetles over the same area. The latter was compiled with the help of local citizens. Interestingly, models based on the number of cherry trees turned out to be the worst predictor for real invasions, since records only extended to trees in public facilities. On the other hand, a combined model using both rivers and roads turned out to be the best, though only marginally better than one made simply from river lengths.

After starting with a detailed simulation of a smaller area, they spread their model over the whole of Saitama Prefecture. They found, for example, that virtual invasions were more prevalent in the east than the west. Not only does this match the growing number of cherry trees in the more urban parts of eastern Saitama, it also broadly agrees with the troubling incidence of beetles in neighboring Gunma Prefecture. The team hopes that the accuracy of the simulations helps inspire focused surveillance and management strategies which selectively target areas with high levels of virtual invasions, to prevent real invasions taking hold.

Staying a step ahead of invasive insect species with computer simulations 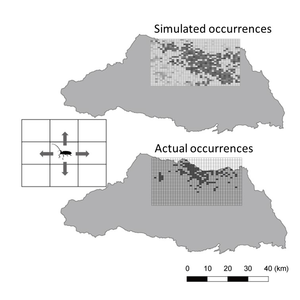