In the sports arena, spectators sometimes create a spectacle known as a wave, as successive groups stand up in unison to yell with arms in the air. Now, researchers reporting in Current Biology on December 22 have shown that small freshwater fish known as sulphur mollies do a similar thing, and for life or death reasons. The collective wave action produced by hundreds of thousands of fish working together helps to protect them from predatory birds.

“The surprises came once we realized how many fish can act together in such repeated waves,” said Jens Krause of the Leibniz Institute of Freshwater Ecology and Inland Fisheries in Berlin and Cluster of Excellence Science of Intelligence. “There are up to 4,000 fish per square meter and sometimes hundreds of thousands of fish participate in a single fish wave. Fish can repeat these waves for up to two minutes, with one wave approximately every three to four seconds.”

When you’re in the vicinity of these unusual fish, found in sulphuric springs that are toxic to most fish, this behavior is hard to miss. That’s because the mollies do the same thing in response to a person nearby.

“At first we didn’t quite understand what the fish were actually doing,” said David Bierbach (@CollectiveBRL), co-first author along with Carolina Doran and Juliane Lukas, also at the Leibniz Institute of Freshwater Ecology and Inland Fisheries and Cluster of Excellence Science of Intelligence. “Once we realized that these are waves, we were wondering what their function might be.”

It reminded the researchers of La-Ola or Mexican waves known from football (soccer) stadiums. The presence of many fish-eating birds around the river made them think it likely that the fish waving behavior might be some sort of defense.

They decided to investigate the anti-predator benefits of the animals’ wave action. Their studies confirmed that the fish engaged in surface waves that were highly conspicuous, repetitive, and rhythmic. Experimentally induced fish waves also doubled the time birds waited until their next attack to substantially reduce their attack frequency.

For one of their bird predators, capture probability, too, decreased with wave number. Birds also switched perches in response to wave displays more often than in control treatments, suggesting that they’d decided to direct their attacks elsewhere.

Taken together, the findings support an anti-predator function of fish waves. The findings are the first to show that a collective behavior is causally responsible for reducing an animal’s predation risk. As such, the researchers say that this discovery has important implications for the study of collective behavior in animals more broadly.

“So far scientists have primarily explained how collective patterns arise from the interactions of individuals but it was unclear why animals produce these patterns in the first place,” Krause said. “Our study shows that some collective behavior patterns can be very effective in providing anti-predator protection.”

It’s clear that the fish’s waving reduces birds’ chances of carrying out a successful attack on sulphur mollies. What’s not yet clear is exactly why that is. Do the birds get confused? Do the waves tell them they’ve been noticed and are less likely to succeed in capturing their prey as a result? In future studies, the researchers plan to explore such questions.

The authors acknowledge funding from the Deutsche Forschungsgemeinschaft. 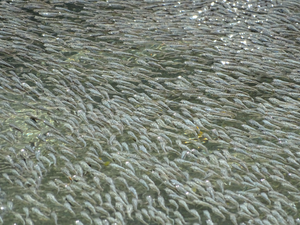 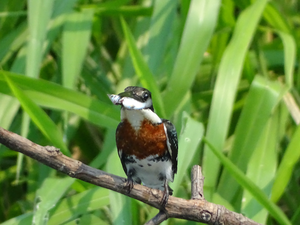