Australian researchers have discovered that negative capacitance could lower the energy used in electronics and computing, which represents 8% of global electricity demand.

The researchers at four universities within the ARC Centre of Excellence in Future Low-Energy Electronics Technologies (FLEET) applied negative capacitance to make topological transistors switch at lower voltage, potentially reducing energy losses by a factor of ten or more.

These very promising results are reported this week at the prestigious International Electron Devices Meeting in San Francisco. And while challenges remain to making a working benchtop device, the work is covered in a patent application.

A transistor is an electronic switch. It has three terminals, or connections: a voltage applied to the gate terminal controls the current which can flow between other two  terminals (called the source and drain terminals). In computer chips, the transistors can be “on” (ie, current can flow) or “off” (current is blocked), representing the “1” and “0” needed for binary logic operations.

Switching a transistor on and off requires wasting a tiny amount of electrical energy each time. But with the computer chips that make all of our electronic devices work contain millions or even billions of transistors, all switching billions of times a second (at gigahertz frequencies), this adds up to a lot of power being wasted as heat. “This is why your phone or laptop gets hot when you’re doing something that requires a lot of computations, such as processing a video,” says FLEET researcher Prof Michael Fuhrer (Monash).

All together, information communication and technology (ICT) consumes about 8% of global electricity supply –a staggering amount of electricity that is doubling every decade. According to the Decadal Plan for Semiconductors released in 2020, the imbalance between rising energy demands of ICT and available energy will ‘strongly limit’ future growth in computing.

Today’s computer chips are all made of silicon, a semiconductor. Semiconductors are insulators, materials that normally don’t conduct electricity. However, adding a bit of extra electrical charge to a semiconductor makes it conduct. This ability of silicon to ‘switch’ on and off is the basis of the field-effect transistor (FET): the gate is connected by a capacitor to a slice of semiconductor running between source and drain terminals. A voltage on the gate charges that capacitor, and the extra charge on the semiconductor allows current to flow from source to drain.

Earlier this year, FLEET researchers discovered that the TQFET can switch at a lower voltage than a conventional FET, overcoming the so-called “Boltzmann’s tyranny” which sets the lower limit for the voltage required to switch a current at room temperature. FLEET researcher Muhammad Nadeem (University of Wollongong) explains that “the low-voltage switching comes about due to an effect called spin-orbit coupling, which is stronger in heavier elements like bismuth. We found that bismuth-based TQFETs could switch at half the voltage, and one-quarter the energy, of similar-sized conventional FETs.”

Recently the team found that they could lower the voltage, and the energy, much further by using a negative capacitor to connect the topological material to the gate terminal.

HOW CAN CAPACITANCE BE NEGATIVE?

A capacitor consists of two conductors separated by an insulator. It has a capacitance C, which expresses the amount of electrical charge Q on the metals when a voltage V is applied between them: C = Q/V. Normally this is a positive number. If it was negative, the capacitor would be inherently unstable, and would want to charge up without applying any external voltage.

Salahuddin and Datta proposed in 2008 that a ferroelectric material could act as a negative capacitor in combination with the (positive) gate capacitance of an FET, to make a combined capacitor that is positive and stable. The net result is to amplify the electric field in a FET. They thought this might allow the FET to switch at lower voltage. “Unfortunately, due to some very subtle effects in the way FETs work, the negative capacitance idea hasn’t proved very useful in conventional FETs,” says FLEET researcher A/Prof Dmitrie Culcer (UNSW). “The voltage lowering due to negative capacitance disappears in a well-designed FET, so it seems there’s not much to be gained using a negative capacitor.”  [Cao and Banerjee 2020].

The team reported the results at the 2021 International Electron Devices Meeting in San Francisco this week. They calculate that a bismuth-based NC-TQFET using La-doped HfO2 ­as a ferroelectric (this ferroelectric material has already successfully been integrated with silicon) could achieve ten times lower switching energy than a state-of-the-art silicon FET. “There’s even more room for improvement,” said Fuhrer, “more advanced ferroelectrics with larger remnant polarizations could enable switching at even lower energies.”

However, many challenges remain to making a working NC-TQFET on the benchtop. Bismuth-based topological insulators with the right structure haven’t yet been made and tested experimentally, and integrating those materials with ferroelectric layers would pose a further challenge. Still, the NC-TQFET provides a clear blueprint for lowering the energy in future transistors.

The FLEET researchers have applied for a patent on the NC-TQFET concept, and FLEET is looking for opportunities to work with partners to develop the technology further. Topological transistors were last year added to the IEEE International Roadmap for Devices and Systems, the internationally agreed blueprint guiding exponential advances in semiconductor technology (mapped by the famous ‘Moore’s Law’) and includes plans for ‘More Moore’, ‘More than Moore’ and beyond CMOS technologies. 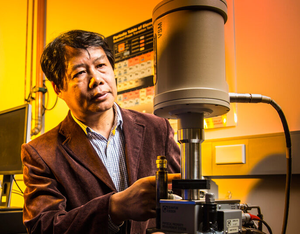 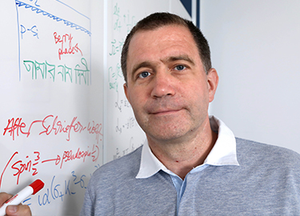