This study was conducted by researchers from the German Centre for Integrative Biodiversity Research (iDiv) and the Institute of Botany of the Chinese Academy of Sciences (IBCAS). It is based on data from the Biodiversity Ecosystem Functioning Experiment China (BEF-China), the world's largest experiment studying forest biodiversity and the functioning of ecosystems.

Forests around the world are under stress. Due to increased global warming, they must adapt ever more rapidly to climatic fluctuations and accompanying extreme events. This leads to tree dieback and reduced growth, leading to less carbon absorption. In concert with increasing emissions, these factors help drive climate change. Furthermore, ecosystem services such as climate regulation, water storage and the provision of materials, e.g., for building, also decline.

The researchers investigated which factors influence the functioning of forests under climatic stress and how these factors interact. They found that species-rich forests are best safeguarded against the effects of climatic stress. For example, if some tree species in a forest grow less due to extreme weather conditions such as heavy rainfall or drought, others can counterbalance the loss. This mechanism stabilizes the overall system and ensures its productivity.

They also discovered that species-rich forest stands provide more stable biomass production than monocultures due to protection against weather fluctuation. As a result, annual timber growth is less variable.

Lead author Florian Schnabel of iDiv and Leipzig University said that the connection between species richness and stable productivity—as well as the mechanisms underlying this connection—had previously only been shown in grassland experiments.

"We can now, for the first time, show this under experimental conditions for highly diverse subtropical forest ecosystems," he said.

The main reason for the stability of forest growth in this study was not the number of different tree species but their different functional characteristics. For example, one species may grow well in a wet year and another in a dry one. This feature—known as "asynchrony"—stems from how different species use inputs such as water, light and nutrients, and how species subsequently interact. The growth stability of the entire tree community is determined by these characteristics and interactions.

The study shows that drought tolerance, hydraulic conductance and evaporative capacity are especially important factors in tree growth stability. The more diverse a forest community's characteristics, the more stable that community's biomass production rate under fluctuating climatic conditions. The forest communities with the most stable growth were not those dominated by drought-tolerant species, but those with diverse drought-tolerance and water-use strategies.

Another study recently published in Nature Ecology & Evolution also supports the results of the current study.

Both studies show that growth stability and productivity in secondary and plantation forests can be improved by increasing the number of tree species. These studies provide important impetus for forest management strategies not only in subtropical areas.

They encourage global forestry management and carbon-offsetting initiatives to focus on planting, restoring, and maintaining diverse, species-rich forests. This effort is key to maintaining and increasing forest growth stability and productivity in the face of climate change.

"These findings have important implications during the UN Decade on Ecosystem Restoration (2021-2030). Restoration projects should consider focusing on diverse, mixed-species forests to enhance stability especially under the climate change scenario," said Prof. MA Keping, chair of BEF-China and a participant in this study. 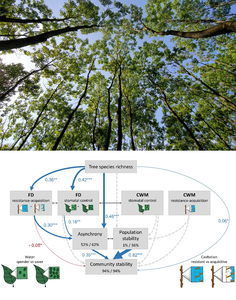