For millennia, vast expanses of the Arctic Ocean have been untouched by humans, ocean where narwhals and other marine mammals lived undisturbed. Now that climate change is causing sea ice to melt, there has been an uptick of human activity in the Arctic. This has resulted in significantly more noise from an array of human sources, including seismic surveys, mine blasts, port projects and cruise ships.

Although the noise is not violently loud when it comes a from a fair distance, for narwhals, the noise is disturbing and triggers stress – even many kilometers away. These are the results of unique experiments conducted with the iconic whale. The University of Copenhagen has helped the Greenland Institute of Natural Resources (Pinngortitaleriffik) to analyse the data collected during the research.

Narwhals are notoriously difficult to study because they only live in the hard-to-reach High Arctic, which is often covered by ice. But the research team managed to tag a herd of narwhals in the Scoresby Sound fjord system of East Greenland using a variety of measurement equipment. They then positioned a ship in the fjord, which exposed the animals to noise – both from the ship's engine and from a seismic airgun used for oil exploration.

"The narwhals’ reactions indicate that they are frightened and stressed. They stop emitting the click sounds that they need to feed, they stop diving deep and they swim close to shore, a behaviour that they usually only display when feeling threatened by killer whales. This behavior means that they have no chance of finding food for as long as the noise persists," explains marine biologist Outi Tervo of the Greenland Institute of Natural Resources, who is one of the researchers behind the study.

Researchers can also see that the whales make an uncommon number of strokes with their tails when fleeing from a vessel. This may pose a danger to them because it vastly depletes their energy reserves. Constant energy conservation is important for narwhals as they need a great deal of oxygen to dive several hundred meters below the surface for food and return to the surface for air.

Everything in a narwhal's life is sound

Narwhals spend much of their time in the dark – partly because the Arctic is dark for half of the year, and partly because these unicorns of the sea hunt at depths of up to 1800 meters, where there is no light. Thus, everything in a narwhal's life is based on sound. And like bats, they orient themselves by echolocation – which includes emitting click sounds as they hunt.

"Our data shows that narwhals react to noise 20-30 kilometers away from a noise source by completely stopping their clicking sounds. And in one case, we could measure this from a source 40 kilometers away. It is quite surprising that we can measure how something so far away can influence whale behaviour," says Professor Susanne Ditlevsen of the University of Copenhagen’s Department of Mathematical Sciences.

Professor Ditlevsen was responsible for the statistical analyses of the enormous and extremely complicated data sets that emerged from the experiments, where data was collected via underwater microphone, GPS, accelerometer (an apparatus that measures movement in three directions) and heart rate monitors. She continues:

"Even when a ship’s noise is lower than the background noise in the ocean and we can no longer hear it with our advanced equipment, the whales can hear and distinguish it from other sounds in their midst. And so, to a degree, their behavior is clearly affected. This demonstrates how incredibly sensitive narwhals are."

Following a week of sonic tests, the researchers observed the whales' behavior return to normal again.

"But if they are exposed to noise for a long period of time – for example, if a port is built nearby that leads to regular shipping traffic, the whales' success in hunting could be affected for a longer period of time, which could become quite serious for them. In this case, we fear that it could have physiological consequences for them and impair their fitness," says Outi Tervo.

Calling upon to authorities

The researchers' hope is that the authorities and other decision-makers will ensure for better management of the activities that create noise pollution in narwhal habitats.

"For the most part, narwhals live around Greenland, Canada and Svalbard in Norway. As such, these countries have the main responsibility for looking after them. Because narwhals are so well-adapted to the Arctic environment, they can't just choose to go to the Caribbean instead. It is being pressured both by warmer water temperatures and in some places, by fish catch. Now, noise enters the equation," says Susanne Ditlevsen.

"Changes are happening so quickly in the Arctic, that we are afraid that narwhals won’t be able to adapt unless more of an effort is made to protect them. Some areas are so important to narwhals that it could be argued that human disturbances should not be permitted there at all. Elsewhere, it may be possible to make rules about, for example, how fast you can sail, or that you can only sail with far-quieter electric motors. Technology offers excellent opportunities to reduce noise," says Outi Tervo.

After thousands of years, an iconic whale confronts a new enemy 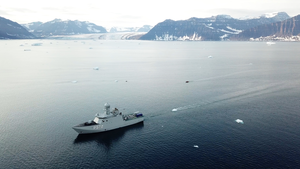 The ship pulling the small airgun 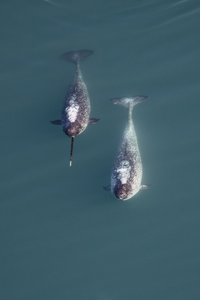