Research by Professor HAYASHI Hajimu et al. of Kobe University’s Graduate School of Human Development and Environment has revealed that not only adults but also children, have a strong tendency to morally judge lies of omission (where the liar doesn’t say anything) more leniently than lies of commission. This knowledge could benefit an easily overlooked aspect in guidance to improve children’s morality.

These research results were published in the international academic journal ‘Journal of Experimental Child Psychology’ on November 22, 2021.

Research Background
Lying is a familiar social behavior committed by everyone. Children have a tendency to tell lies to conceal transgressions in order to avoid angering their parents or teachers.

Types of lies can be divided into two categories. The first type is deceiving the other party by ‘telling them something that is untrue’. This is the type that we automatically think of when we hear the word ‘lie’: it is actively expressed and is called a ‘lie of commission’. However, we also try to deceive people by ‘not saying anything’ even though we know the truth. This is called a ‘lie of omission’.

It is known that people don’t always judge situations objectively and rationally; cognitive bias can distort their conclusions. The same is true for commission and omission. With regards to transgressions, people will judge a lie of commission as morally worse than a lie of omission, even when the degree of intent and the resulting outcome are the same. This is known as ‘omission bias’. Research has mainly focused on moral judgement of active and inactive behaviors in situations where the outcome is the same. For example an active situation where a person knocks over someone’s precious vase and it breaks, vs. an inactive situation where even though the person notices that someone else’s precious vase is about to fall over they don’t try to catch it (both scenarios result in the vase falling and breaking).

In response to this, the current research focused on voiced and unvoiced lies. The researchers investigated whether omission bias occurred in moral judgments of lies and whether this bias is affected by age and scenario.

After answering control questions to confirm their understanding of each situation, each participant was asked to morally evaluate each of the two stories in all four pairs on a 7-point scale (3: very good, 2: good, 1: slightly good, 0: neither good nor bad, -1: slightly bad, -2: bad, -3: very bad). For example, ‘In Story 1 [or Story 2], how good or bad was it for Misaki to have said, ‘No, it wasn’t me’ [or for Nao to have said nothing]?”’

Results:
For all 4 scenarios, all age groups judged lies of commission to be worse than lies of omission, indicating that omission bias omission bias in moral judgments of lies occurred in children as well as in adults (Figure 4).

In addition, the researchers found that the degree of bias varied depending on the age of the participant. In third graders’ and sixth graders’ judgements, there was no significant difference in the degree of bias between the four situations. In contrast, a significant difference was found in adults; omission bias in adults was stronger for the scenarios that benefited self rather than others and for scenarios in which deliberate transgressions, rather than accidental ones, were concealed. The control questions to confirm understanding ensured that participants who couldn’t distinguish between deliberate and accidental transgressions in the scenarios were eliminated from the study. Therefore the results show that unlike adults, children demonstrate a similar degree of omission bias regardless of the situation.

Looking again at Figure 4, we can see that adults were more tolerant than elementary school children in their judgement of lies of omission, indicating that adults display strong omission bias. Furthermore, at third-grade level, children already show leniency towards lies that are told to protect another person. However, differences in intention for concealing transgressions did not influence third graders’ judgements. On the other hand, sixth graders and adults were more tolerant in their evaluations in cases where the lie protected a person who had committed an accidental transgression.

Further Developments
Children are brought up being told that ‘lying is bad’, however from the results of this study we can see that children’s moral judgments of lies gradually changes as they grow up.

The findings of the current study have important applications to education. For example, if children did not report their or others’ transgressions, omission bias occurs and it may make them think, ‘‘I did not tell a lie, so it shouldn’t be a problem.” In this case, an adult such as a parent or teacher could explain that withholding the truth (lies of omission) can have the same consequences as providing false information (lies of commission), and thus the two types of lies may be equally bad.

However, the current results show that in adults omission bias in moral judgments of lies not only occurs but also is stronger, which may lead to missed opportunities for improving children’s morality. It is thought that if adults are made aware of the influence of bias, it will be possible to improve children’s morality concerning lies.

Acknowledgements
This research was supported by KAKENHI grants from the Japan Society for the Promotion of Science (JSPS) (Grant numbers JP18K03065 and JP21K03026).

Omission bias in children’s and adults’ moral judgments of lies

Children, as well as adults, are more lenient towards “lies of omission” 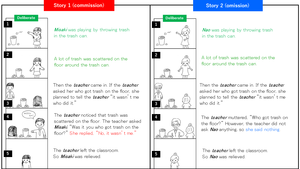 Figure 2: Examples of scenarios where the protagonist lies to conceal their own transgression. 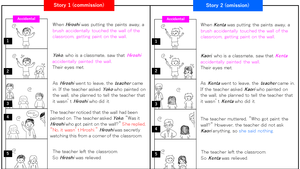 Figure 3: Examples of scenarios where the protagonist lies to conceal another’s accidental transgression. 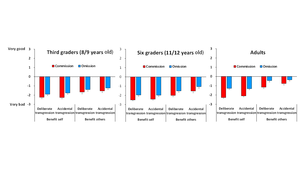 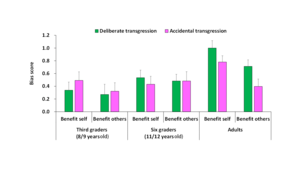