Tokyo, Japan – Researchers from Tokyo Metropolitan University have discovered how the sponginess and stickiness of stem cell nuclei controls how they “differentiate” into specialized cells. They found that the nucleus starts solid-like but becomes more fluid-like over time. Less force is transmitted to its inner parts, leaving cells to commit to a certain differentiation pathway. How stem cells choose and keep to differentiation paths continues to be a crucial question for medical science.

Much of our understanding of biological materials and living systems is a biochemical one, an intricate patchwork of pathways connecting a vast array of complex chemicals. However, the rapidly emerging field of mechanobiology takes a different approach, looking at how living materials respond to physical stimuli, like the softness of the inside and outside of a cell. Complex mixtures such as the interior of a cell have both a spongy, solid-like character (elasticity) and a sticky, liquid-like character (viscosity), summing to a more complete description of how materials respond to forces. This is known as viscoelasticity.

The same applies not only to cells but the things they are made of. A team led by Associate Professor Hiromi Miyoshi of Tokyo Metropolitan University have been looking at the nuclei of human mesenchymal stem cells, a type of cell that can mature (or “differentiate”) into a wide range of cell types, including muscle, fat, bone, and cartilage. They introduced tiny, inert beads into nuclei where they were seen to wiggle under the action of thermal energy in the surroundings. The team studied this motion and measured the viscoelasticity of nucleus interiors, a method known as micro-rheology. The technique gives two quantities, the storage and loss moduli, which correspond to the elasticity and viscosity of materials. They focused their attention on nuclei as they differentiated into osteoblasts (bone cells). This was the first time that the viscoelasticity of nuclei was tracked through the whole differentiation process in human stem cells.

As the cells became more differentiated and specialized, the team found that the nuclei became less solid, and more liquid-like. When a solid ball of matter is poked, the force is transmitted directly to its core. This is not the case when it is more viscous than elastic. As it becomes more fluid-like, the nucleus becomes less susceptible to external forces as it differentiates, committing more and more to the differentiation path it has chosen, a balance between what is known as plasticity (responsiveness to change) and homeostasis (resistance to change). Looking at the distribution of DNA in the nucleus, they discovered that much of the change in the viscoelastic nature of the nuclei is to do with the aggregation of chromatin, multi-component structures made of DNA and proteins.

For a long time, it was believed that the aggregation of chromatin had everything to do with the suppression of certain genes. The DNA in chromatin is the instruction booklet for the synthesis of proteins; condensation of chromatin is like sticking pages together to make them unreadable. Now, the team’s findings show that it also serves a completely different purpose, careful tuning how responsive the nucleus is to external forces, particularly in ensuring that it can commit to a certain differentiation path. Their findings are a milestone in understanding the intricate workings of a fascinating system which underpins the development of much of the human body.

Changing “sponginess” of cell nuclei help them decide their future 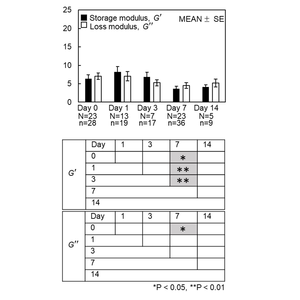