Each one of the trillions of cells that make up the human body suffers more than 10,000 DNA lesions every day. These injuries would be catastrophic if cells were unable to repair them, but a very delicate machinery that detects and repair genetic damage is at work to prevent DNA mutations and diseases such as cancer. With the help of machine learning applied to high-throughput microscopy, among other techniques, researcher Bárbara Martínez, a member of the Metabolism and Cell Signalling Group led by Alejo Efeyan at the National Cancer Research Centre (CNIO), along with Raul Mostoslavsky and his team from Massachusetts General Hospital (Boston, USA), have managed to visualise this DNA repair machinery in detail and identified new repair proteins. These results, designed in Boston, developed between Boston and Madrid, and published this week in Cell Reports, could help develop new cancer therapies.

As soon as there is DNA damage, such as a DNA double-strand break, the cell activates a mechanism named DNA damage response that acts like a “call to the emergency services,” Martinez explains. Proteins rapidly bind damaged DNA to send alarm signals, which will be recognised by other proteins specialised in repairing the damage.

The goal of chemotherapy is to kill tumour cells by inducing DNA lesions, which cause cancer cell collapse and death. “By knowing how DNA lesions occur and how they are repaired, we will learn more about how cancer develops and how we can fight it. Any new discovery in DNA repair will help develop better cancer therapies, whilst protecting our healthy cells,” says Martinez.

The researchers have developed a new methodology that, with the help of a machine learning analysis method designed by the CNIO Confocal Unit, has allowed the analysis of this process with a degree of detail and precision never before achieved. “Until now, one limiting factor in tracking DNA repair kinetics was the inability to process and analyze the amount of data generated from images taken by the microscope.”

Researchers have used high-throughput microscopy that allows the acquisition of thousands of pictures of cells after induction of genetic damage. In the first phase, they introduced more than 300 different proteins into the cells and evaluated in a single experiment whether they interfered with DNA repair over time. This technique has led to the discovery of nine new proteins that are involved in DNA repair.

But the authors decided to go one step further and visually monitored the 300 proteins after generating genetic damage. To do this, they adapted a classic DNA micro-irradiation technique – which damages DNA with a UV laser – to be used on a large scale format for the first time and analyse the behaviour of the 300 proteins studied.

“We saw that many proteins adhered to damaged DNA, and others did just the opposite: they moved away from the DNA lesions. The fact that they either bind to or remove themselves from damaged DNA, to allow the recruitment of repair proteins to the lesion, is a common feature of DNA repair proteins. Both phenomena are relevant”.

One of the proteins discovered is PHF20. The authors showed that this protein moves away from lesions within seconds after damage to facilitate the recruitment of 53BP1, a protein critical in DNA repair. Cells without PHF20 cannot repair their DNA properly and are more sensitive to irradiation than normal cells, indicating that PHF20 is important for DNA repair.

These technologies offer new opportunities to study DNA repair and to manipulate it. “An advantage is that both platforms are very versatile and can be used to discover new genes or chemical compounds that affect DNA repair. We have evaluated hundreds of proteins in minimal time by using techniques allowing direct visualization of DNA repair.” 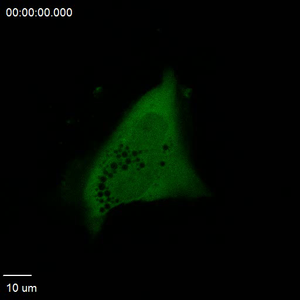 Video showing how one of the proteins discovered in this work, RNF166, targets DNA breaks.