Knowing, when exactly immune cells will try to invade a tumor is difficult. In order to be able to study this cell invasion process in detail, scientists like Professor Daria Siekhaus and her team need something more reliable. That’s why they turn to fruit fly embryos. During the development of these embryos, macrophages, the dominant form of immune cells in the fruit fly, travel from the spot where they are born to the place where they are needed by invading tissue. They do so at a certain time point, enabling scientists to study the process within these tiny transparent animals. With the help of IST Austria’s state-of-the-art Bioimaging Facility, they watch as the macrophages – marked with a green fluorescent protein – push their way into the tissue.

Which cellular changes are needed for this and which genes trigger such alterations is still largely unknown. With their new study by first authors Vera Belyaeva, Stephanie Wachner, and Attila Gyoergy, the Siekhaus group sheds light on this process, essential in health and disease. “Previously, we found that a specific gene, called Dfos, is enriched in the immune cells and we wondered what it did,” says Siekhaus.

“Now we can prove that it triggers the assembly of actin filaments.” These protein threads are concentrated at the inside of the cell membrane, also known as cell cortex, giving the cell surface stability. The scientists show that through a complex cascade involving different proteins, the actin filaments are made denser and more connected to each other, forming a stable shell. “We hypothesize that this works like a tank, deforming surrounding cells while protecting the immune cell’s nucleus from mechanical pressure as it invades the tissue,” Siekhaus explains. Furthermore, the team was able to show in vivo that missing this actin shell makes it harder for immune cells to infiltrate unless the surrounding tissue is made softer.

Although a fruit fly and vertebrates such as mice and humans do not have much in common at first glance, there are many similarities in the way their genes function. Working together with Professor Maria Sibilia from the Medical University of Vienna, the researchers at IST Austria found evidence that the vertebrate gene Fos, the equivalent to the fruit fly gene Dfos, activates the same genetic pathways. “We think that the same mechanism we found in the fruit fly also plays a role in vertebrates,” says biologist Daria Siekhaus.

This raises the hope that the group's findings could help identify new targets for the treatment of cancer. In the field of immuno-oncology, researchers are looking for ways to activate the body’s immune system to attack a tumor. One of the challenges they face, is to enable the immune cells to infiltrate the tumor. “If one could strengthen their protective shell, it could make it easier for them to invade the tumor tissue,” Siekhaus concludes.

The IST Austria project part was supported by funding from the Austrian Science Fund (FWF) and the Marie Curie Career Integration Grants awarded to D.S, and a DOC fellowship by the Austrian Academy of Sciences (OEAW) awarded to S.W.

In order to better understand fundamental processes, for example, in the fields of neuroscience, cell biology, or genetics, the use of animals in research is indispensable. No other methods, such as in silico models, can serve as alternative. The animals are raised, kept, and treated according to the strict regulations of Austrian law. All animal procedures are approved by the Federal Ministry of Education, Science and Research. 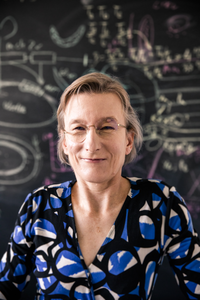 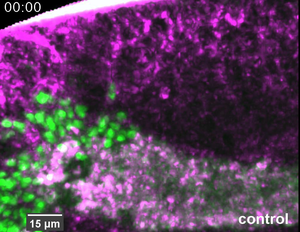