The Link between Electrical Voltage and Brain Flexibility

A new study by Tel Aviv University found, for the first time, a direct and significant link between changes in G-protein-coupled receptors and the brain’s ability to adapt to external changes. The study, published recently in the prestigious journal Nature Communications, was conducted by Dr. Moshe Parnas and his team from the Sackler Faculty of Medicine and the Sagol School of Neuroscience at Tel Aviv University.

Our brain has a large amount of G protein-coupled receptors (GPCR). Activation of these proteins causes a chain of chemical reactions within the cell. These proteins are very common in the brain and are involved in almost every brain activity, such as learning and memory. The nerve cells in which GPCRs are common, experience changes in their electrical voltage. 20 years ago, it was unexpectedly discovered that GPCRs are voltage-dependent, meaning that they sense the changes in the electrical voltage of nerve cells and change their function, which is voltage-dependent. However, to date, it has not been clarified whether the voltage dependence of GPCR proteins has a physiological significance that affects brain activity, our perception, and behavior. In fact, the scientific mindset was that this voltage dependence has no physiological significance.

Dr. Parnas and his team investigated, by means of the olfactory system of the fruit fly, whether the voltage dependence of GPCRs is important for brain function. To this end, the researchers decided to focus on one receptor from the G protein-coupled receptor family (called "Muscarinic Type A "). This protein is involved, inter alia, in habituation to an odor, a process in which the intensity of the reaction to the odor decreases as a result of continuous exposure to it. Thanks to this mechanism, a few minutes after entering a room containing a distinct odor – we stop smelling it.

Dr. Parnas explains: "Nerve cells are able to communicate with each other and brain flexibility is expressed in the ability of nerve cells to set up new connections with each other and change existing connections – and thus influence behavior. Muscarinic Type A protein is involved in strengthening the bond between nerve cells, and strengthening of this bond causes fruit flies to get used to the odor and indicates normal brain flexibility."

During the course of the study, the researchers were able to neutralize the voltage sensor of the "Type A" Muscarinic protein by means of genetic editing, and thus eliminate its dependence on the electrical voltage of the nerve cell.  The researchers found, by applying molecular, genetic and physiological methods, that disabling the voltage sensor actually causes uncontrolled brain flexibility and consequently the process of excessive and uncontrolled habituating to an odor. Dr. Parnas adds: “We found that the receptor in question is very much involved in strengthening the intercellular bond in the brain, much more than what we thought. When we turned off its voltage sensor, the connection between the nerve cells became too strong.”

According to Dr. Parnas, “These findings change our perception of G-protein-coupled receptors. To date no reference has been made to the effect of electrical voltage on their function and its implications on brain flexibility and conduct. These receptors are involved in many systems and brain diseases and we have now discovered a control mechanism upon which an attempt at drug treatment can be based. Following this, we are continuing to investigate additional receptors. It is reasonable to assume that their dependence on the electrical voltage is important in other systems and not only in the olfactory system.”

It would be prudent to note that this study by Dr. Parnas is a follow-up to a study conducted by his parents, Prof. Hanna Parnas and the late Prof. Itzchak Parnas, about two decades ago. They were the first to find that GPCR receptors can sense electrical voltage in cells but their research remained solely at the protein level. The current study by Dr. Parnas and his team advances to the next stage, connecting molecules, brain and conduct and indicating, for the first time, that eliminating their ability to sense electrical voltage affects brain activity and our ability to optimally adapt to the environment.

The link between electrical voltage and brain flexibility a new study by Tel Aviv university found, for the first time; a direct and significant link between changes in G-protein-coupled receptors and the brain’s ability to adapt to external changes 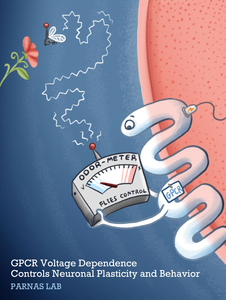