In June 2021, an unprecedented heat wave hit the Pacific Northwest and Canada, killing an estimated 1,400 people. On June 28, Seattle reached 108 F — an all-time high — while the village of Lytton in British Columbia recorded Canada’s highest-ever temperature of 121.3 F on June 29, the day before it was destroyed by a heat-triggered wildfire.

Climate change is expected to bring more such extreme heat events globally, with far-reaching consequences not just for humans, but for wildlife and ecosystems.

In 2019, University of Washington researchers witnessed this in Argentina at one of the world’s largest breeding colonies for Magellanic penguins. On Jan. 19, temperatures at the site in Punta Tombo, on Argentina’s southern coast, spiked to 44 C, or 111.2 F, and that was in the shade. As the team reports in a paper published Jan. 4 in the journal Ornithological Applications, the extreme heat wave killed at least 354 penguins, based on a search for bodies by UW researchers in the days following the record high temperature.

“This extreme event fell near the tail end of the breeding season for Magellanic penguins, so it killed a large number of adults, as well as chicks,” said lead author Katie Holt, a UW doctoral student in biology. “It’s the first time we’ve recorded a mass mortality event at Punta Tombo connected to extreme temperatures.”

The Jan. 19 heat wave was the highest temperature the researchers have ever recorded at Punta Tombo, where UW teams have been studying Magellanic penguins since 1982 under co-author P. Dee Boersma, a UW professor of biology. Temperatures at the site during the breeding season typically rise from the 50s F to the low 100s F. In a past season, researchers had previously recorded a shade high of 43 C, or 109.4 F, but that older record was not associated with a mass die-off of penguins, according to Holt.

The extreme heat on Jan. 19 affected adults and chicks differently. Nearly three-quarters of the penguins that died — 264 — were adults, many of which likely died of dehydration, based on postmortem analyses conducted by the UW researchers. They found 27% of adult penguin corpses along paths heading out of the breeding colony to the ocean, where they could get a drink — penguins have glands that can filter salt out of the water. A journey from the colony to the ocean can stretch up to one kilometer and, at its longest, might take an adult Magellanic 40 minutes to complete. Dead adults were often found on their stomachs with their feet and flippers extended and mouth open, a common panting and cooling pose for Magellanic penguins.

Some sections of Punta Tombo, where thousands of Magellanic penguins gather to breed each austral spring and summer, fared worse than others. In the central section of the colony, about 5% of adults perished. But other sections saw few or no fatalities, indicating that microclimates and access to the ocean, as well as individual health and nutrition, may have influenced survival rates.

UW researchers have documented past mass mortality events at Punta Tombo linked to severe rainstorms that killed primarily chicks, including one year where deluges killed 50% of the colony’s recently-hatched offspring. The 2019 heat wave is a particular concern because it led to the loss of a large number of adults in a single event, according to Holt.

“Any mass die-off like this is a concern,” said Holt. “But what is most concerning about heat-death mortality is that it has the potential to kill a lot of adults. The population viability of long-lived seabirds — like Magellanic penguins — relies on long lifespans. Adult Magellanic penguins can live more than 30 years, so they typically have many opportunities to successfully raise chicks. If we’re losing large numbers of adults from a single event like this, that’s a major concern.”

Based on examination of a subset of corpses, at least 8 out of 10 of the adults that died were males. That likely reflects the high prevalence of male Magellanic penguins at Punta Tombo — roughly three males to every female — rather than a differential survivability in extreme heat. The colony’s skewed sex ratio has grown over time. Research by Boersma’s group shows that adult females are less likely to return to Punta Tombo to breed, likely because they have more trouble finding enough food in the open ocean outside the breeding season. This has likely contributed to an overall decrease in the size of the colony since the late 1980s.

The remaining 90 fatalities from the Jan. 2019 heat wave were chicks. Based on postmortem analyses, the chicks that perished tended to be well fed and did not show signs of dehydration. They may have died because, with full bellies and small bodies, they could not regulate their body temperatures properly in the extreme heat, according to Holt.

Climate change is expected to produce more extreme weather events of all types globally, though effects will vary by locality. The consequences of this heat wave, though grim, also show scientists the limits that some species can endure.

Boersma is founder of the UW-based Center for Ecosystem Sentinels, which studies Magellanic penguins and other species that are seen as key indicators of ecosystem health.

“Penguins could have the ability to cope, like moving breeding sites,” said Holt. “But it will take time to investigate whether those adaptations are effective.” 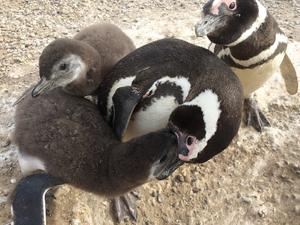