Cross-country skiers push themselves to their performance limits in competition. Yet most of their training takes place at low intensity. How does that work?

Top cross-country skiing athletes have been participating in a scientific study to understand how their training regimen works.

“Our most important finding is that we were able to demonstrate a lot of similarities between training at low and high intensity in variable terrain,” says PhD candidate Trine Margrethe Seeberg at the Norwegian University of Science and Technology's (NTNU) Department of Neuromedicine and Movement Science.

She is also a senior researcher at SINTEF Digital, an independent research institution that is Scandinavia's largest.

The similarities are particularly evident in less strenuous terrain and on moderate slopes.

“In both types of training, skiers use largely the same sub-techniques, similar frequency and same power distribution between arms and legs. The physiological and biomechanical responses to changing terrain at low and high intensity are thus also similar. The wearable sensors measure responses for heart rate, oxygen consumption, muscle activity, movement patterns and technical skills,” she says.

A different kind of sport

Cross-country skiing differs from sports such as track running and swimming in that the intensity varies a lot with the terrain. Skiers adjust their different techniques according to the terrain and tactical choices.

The sport requires some special qualities. A hard uphill requires close to maximum effort, but the downhills allow you to recover a bit and recharge.

“After a long downhill, a skier should be ready to ‘pour it on.’ It turns out that you don’t have to train at high intensity to improve endurance and your ability to recharge the body quickly. Low intensity accomplishes this too,” Seeberg says.

You can train several other important techniques just as well at low intensity:

“The major benefit of training at low intensity is that the athlete can train much more. The skier can practise adapting the body’s physiology and technique to the variable course conditions over several hours,” Seeberg says.

Cross-country racers normally do two workouts each day. If an athlete trains too much at high intensity, the training volume has to be reduced considerably to allow the body to recover.

“Training without proper recovery works against you. The point is to find the right balance between training at low and high intensities,” Seeberg says.

But competitions require high speed and high intensity. Seeberg says that training at high intensity is also important to improve their pace and endurance.

“Yes, of course that’s really important. High-intensity training is necessary for training the heart muscle, so skiers also do that type of training, but the volume is low in relation to the amount of low-intensity training,” she said.Main difference found on uphills

During a normal low-intensity workout, skiers reduce their speed considerably and use something called the V2 alternate poling technique on steep slopes. In competitions, the V2 alternate can be too slow on some hills, and racers use the regular V2 more for high speeds. V2 poling is a far more demanding technique than the alternative on steep uphills, so some of the racers’ uphill training has to be at high intensity.

Seeberg believes having a goal for every training workout is important. You need to choose the intensity and terrain that suits the workout you want to do.

“For example, if you want to do a low-key workout at a low heart rate and with good technique, you wouldn’t want to choose the toughest race course. You’ll wear yourself out fast,” she said

“Instead, find less strenuous terrain that’s suitable for low intensity training. To practise uphill technique, you often need to increase your intensity, so then it can be a good idea to use racing trails, like in Holmenkollen in Oslo and Granåsen in Trondheim, for example," she said.

Seeberg is a trained physicist, and she attached advanced wearable sensors to the skiers’ bodies. The sensors include a gyroscope, an accelerometer, a GPS and a barometer. The movement data are linked with physiological data on heart rate, muscle activity and power.

The data in the study were obtained indoors in the laboratory under controlled conditions through the use of roller skis on a large treadmill that can vary speed and incline.

Thirteen elite male cross-country skiers participated. The measurements taken by the sensors also revealed a number of other phenomena, including how power was distributed between the arms and legs.

At the beginning of a session, slightly more power is generated from the upper body than from the legs, while by the end of the workout the legs contribute the most to the momentum.

The study also found that the cycle rate – the number of pole plants and skate strides per minute – is quite similar at high and low intensity. The difference is that the skiers’ pole plants last longer and they glide farther when skiing fast at high intensity.

Seeberg’s study is part of the AutoActive research project that SINTEF, NTNU, the University of Oslo, Olympiatoppen, Ullevål Hospital and the MS Centre Hakadal are participating in. Movement research is aimed at both top athletes and MS patients and is supported by the Research Council of Norway.

Physiological and Biomechanical Responses to Cross-Country Skiing in Varying Terrain: Low- vs. High-Intensity 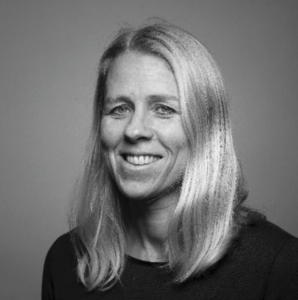 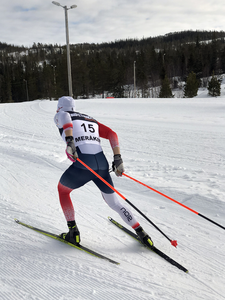 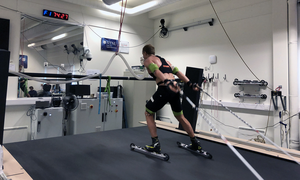