This study is led by Prof. Zang (Green Catalysis Center and College of Chemistry, Zhengzhou University), and the research team proposed a new aggregation-induced emission mechanism for phosphorescent nanoclusters, that is, aggregation-induced barrier to oxygen (AIBO).

In their AIE study of phosphorescent trinuclear copper(I) nanoclusters protected by the alkyne ligands, the researchers found that when irradiated dimethyl sulfoxide (DMSO) stock solution containing metal clusters with ultraviolet lamp, a rapid phosphorescent switching effects was observed (see the video below). Interestingly, the emission wavelength after irradiation was very similar to those of the crystalline state and the aggregated state in the water, indicating that the emission mechanism in the solution was the same as that in solid states. “Some other factors must be existence to affect the AIE property of phosphorescent clusters” Prof. Zang says.

Furthermore, the research team proposed a new AIE mechanism for phosphorescent clusters, namely, aggregation-induced barrier to oxygen (AIBO): When in the solution dispersion state, the phosphorescence of the cluster is quenched by dissolved oxygen in the solvent; however, when the aggregate is formed, the oxygen and cluster are isolated, making the cluster shows strong phosphorescence-emitting properties (see the diagram below). The new mechanism is also validated by dispersing cluster samples in porous silica gel, which demonstrating a super-sensitive sensing effect on oxygen.

This work not only reports a series of AIE copper (I) clusters, enriching their various applications, but more importantly, proposes a new AIE mechanism and provided a new perspective to understand the influence of aggregation on the phosphorescence properties of molecules. 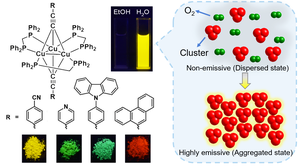 AIBO mechanism for the AIE characteristic of metal cluster