A time-dependent electric current emits an electromagnetic wave, a basic physical effect exploited in telecom antennas. Transferring this mechanism to the ultrashort length and time scales of the quantum world allows for generating intense picosecond terahertz (THz) pulses in asymmetric semiconductor quantum structures. The THz pulses display a single oscillation of the electric field and can be tailored via the nonlinear generation process.

THz waves are an important analytical tool in science and technology, with applications ranging from materials and tissue characterization to security checks at airports. Ultrashort THz pulses with a duration of a few picoseconds (1 ps = 10-12 s) and high electric-field amplitudes are used in time-resolved spectroscopy of condensed matter. Moreover, they play a key role in telecommunication at ultrahigh data transmission rates. The strong potential of THz methods and technology calls for the development of efficient and compact THz sources.

Scientists from the Max-Born-Institute and the Paul-Drude-Institute in Berlin, Germany, have now demonstrated a novel concept for generating ultrashort THz waveforms by tailoring electronic currents in a compact optically driven quantum device [Optica 8, 1638 (2021)]. A mid-infrared driving pulse generates a time-dependent electric current in a highly compact semiconductor structure consisting of 20 asymmetric nanometer-thick quantum wells. This current emits THz pulses, which consist of a single THz oscillation cycle with a peak electric field amplitude of up to several kilovolts/cm. The time structure of the THz pulses can be tailored via the excitation conditions of the quantum device.

The basic mechanism of THz generation is illustrated in Figure 1. Electrons are spatially confined in a quasi-two-dimensional potential well, which is asymmetric along the stacking axis (c axis) of the AlxGa1-xAs semiconductor layers. Due to the narrow width of the potential well, electron quantum states 1 and 2 with different (minimum) energies arise, the so-called subbands. The asymmetric shape of the potential along the c axis results in spatially shifted probability distributions of electrons in the two subbands.  Upon electron excitation from subband 1 to subband 2 by a mid-infrared pulse, the overall electron density experiences a time-dependent spatial shift of several nanometers within the asymmetric well. This transient spatial charge shift is equivalent to a time-dependent current. According to the basic laws of electrodynamics, this so-called shift current emits an electric field. For a femtosecond duration of the driving pulse, the frequency of the emitted field is in the THz range.

Figure 2 displays the emitted THz electric field as a function of time, as measured for different strengths of the mid-infrared driving pulse. All THz pulses are monocycles, i.e., the THz field oscillates only once during the pulse. The shape of the THz waveforms changes with the strength of the driving pulses, due to the nonlinear character of the generation process. This fact can be exploited to tailor the THz waveforms in a wide parameter range. The overall THz generation efficiency of up to several percent of the driving mid-infrared field makes this scheme particularly interesting for generating versatile THz pulses in highly compact optoelectronic sources working at, e.g., gigahertz repetition rates. 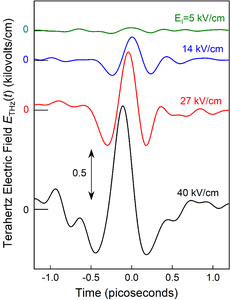