With the long-term goal to realize carbon neutrality, lithium battery has acquired a growingly central role in the development of human society. The accurate yet efficient prognosis on battery state of health (SOH) remains vital in ensuring a safe and reliable operation. In addition, as the demand to increase battery energy density continues to grow, the development of novel, high-energy-density battery systems such as lithium metal batteries is of paramount significance. Conventionally, experiments that measure battery lifespan and SOH are adopted to evaluate its performance, and thereby assisting the development and evolution of novel battery systems. This kind of process, however, normally requires long evaluation cycle, which inevitably hinders battery developers and users from efficient production, use, and optimization. On the other hand, the nourishment of informatics and data science has brought new opportunities to battery prognosis. These data-driven or machine-learning-based methods exhibit the great potential to unveil hidden information from the battery degradation data of early cycles and generate forecasts on its future performance. So far, most data-driven approaches for battery prognosis are focused on predicting the performance of commercial lithium ion batteries, which usually require large dataset consisting of high quality data. When exploring novel battery systems such as lithium metal batteries, however, these kinds of methods are less suitable as the dataset size as well as the data quality is rather limited. It is therefore extremely important to develop a generalizable battery prognosis method that is compatible with small dataset and can endure compromised quality data.

Recently, a team led by Prof. Xinyan Liu and Prof. Hong-Jie Peng from Institute of Fundamental and Frontier Sciences at University of Electronic Science and Technology of China developed a generalizable, online approach that can forecast the capacity degradation trajectory of lab-assembled lithium metal batteries. This approach leverages the time series decomposition method to extract physically meaningful features from battery discharge curves, realizing an online prediction for a single cell using only its early degradation data without the need to build large, high-quality offline training set. The robustness and generalizability of this approach also allows for the demonstration on a compromised quality dataset consisting of batteries varying in battery architectures and cycling conditions, with superior accuracy for end of life (defined as the number of cycles at 80% capacity retention) and degradation trajectory prediction with average errors of 8.2% and 2.8%, respectively. Lastly, the features formulated in this work are also demonstrated to provide physical insights, the incorporation of which into advanced battery characterization methods can further assists the understanding of battery degradation mechanism and enlightens the development of better batteries. The work entitled “A generalizable, data-driven online approach to forecast capacity degradation trajectory of lithium batteries” was published on Journal of Energy Chemistry. This work receives experimental data support from Prof. Jia-Qi Huang’s research group at Beijing Institute of Technology.

The framework of this approach is outlined in Fig. 2. First, seasonal and trend decomposition using loess method (STL) is leveraged to extract information from discharge voltage curves, which are decomposed to three time components, the trend component (i.e. secular variation), the seasonality component (i.e. (quasi)-periodic variation) and the residual (random noise). Features are further formulated from the two major components. The trend component is sufficiently described through its mean (trend_mean), while all the seasonality curves are compared with the one from the initial cycle and the integral area of their difference (seasonality_area) is adopted as a measure of the shape evolution (Fig. 2a). The as-obtained features can then be extrapolated to future cycles (Fig. 2b) with autoregressive integrated moving average method (ARIMA). And a constrained multivariate linear regression is adopted to correlate the features with its apparent capacity (Fig. 2c).

The battery cycling performances are illustrated in Fig. 3a. It is clearly shown that as the battery-related parameters such as cathodes, anodes, electrolytes, and cycling rates vary, their cycling stabilities deviates distinctively. Fig. 3b illustrates the forecast results on an example battery, using its early cycling data until 95%, 92% and 90% capacity retention. In general, the forecasted trajectories have shown reasonable agreement with the actual experimental measurements, and the prediction accuracy grows as more data becomes available. When using 90% retention data, the capacity trajectory and end of life prediction error are 0.9% and 3.3%, respectively. In Fig. 3c-d, the overall model performance is further compared against a benchmark method as previously suggested by Severson et al. (Nat. Energy 2019, 4, 383). In the benchmark method, the variance of capacity difference between the nth and 1st cycle (n refers to the cycle number) was chosen as an alternative discharge-curve-related feature. It is notable that the benchmark scheme mostly overestimates the battery lifespan while the STL-based approach exhibits better agreement with the experiments, accentuating the value of this approach in forecasting cycling performance of lab-assembled batteries. In addition, both the trend_mean and seasonality_area features are found to be highly correlative to (electro)chemistries in the working battery, the omission of either was found to result in a reduction of prediction accuracy. The trend_mean and seasonality_area features are reflective of the battery internal impedance growth and the shape variation of voltage profiles respectively, implicating different (electro)chemical processes in battery degradation. The as-outlined approach can be further incorporated with advanced characterization techniques such as three-electrode measurement to open up new opportunities to understand degradation chemistries of LMBs. 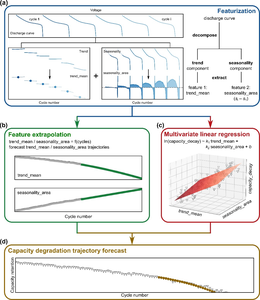 A schematic illustration of the method architecture. 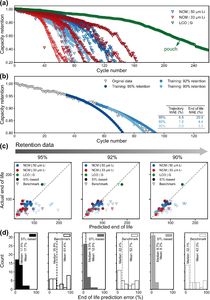