Once ranging throughout the southeastern United States, the only breeding population of the endangered Florida panther (Puma concolor coryi) is restricted to a little more than 5 percent of its historic range in South Florida. Florida panthers need corridors for dispersal, which most commonly occurs when they leave their maternal range to head out on their own. Moreover, they have very large home ranges – males need about 200 square miles, and their survival relies on their ability to move from protected area to protected area through wildlife corridors.

Researchers from Florida Atlantic University conducted the first study documenting the effect of USSE facilities on both habitat suitability and broad-scale connectivity of suitable habitat for any large carnivore. The study encompassed Peninsular Florida, excluding the Panhandle region, and focused on 45 installed or planned USSE facilities equaling about 27,688 acres – the average area of a USSE plant was about 615 acres.

Results of the study, published in the Journal of Applied Ecology, showed that most often, solar facilities were installed on grasslands and pastures (45.7 percent of total area replaced by solar facilities), and agricultural lands (34.9 percent). Forest was the third most impacted land cover category (13.2 percent). The findings suggest a substantial bias in locating USSE facilities within rural and undeveloped lands, which may provide connectivity that is sufficient for Florida panthers to roam, live and breed.

“Our study suggests that in the drive to shift our energy production to carbon neutral sources, while maintaining maximum profitability, wildlife outside human dominated landscapes with large ranges and dispersal potentials may be pushed into less favorable habitat or cut off completely from available habitat by degradation of corridors,” said Olena V. Leskova, M.S., senior author, a Ph.D. student in FAU’s Department of Geosciences within the Charles E. Schmidt College of Science and a geographer/geospatial scientist at the South Florida Water Management District.

Most USSE facilities in this study are surrounded by 6-foot-tall chain-link fences, topped with barbed wire, which is assumed to cause dispersal redirection. Some facilities use wildlife-friendly 6-foot split rail fences with wide mesh or short intervals of 4-foot split rail fences with wide mesh and some have double fences. Ecological costs of fencing to wildlife include disrupting their migration routes, dividing their habitats, restricting their range and evolutionary potential and directly or indirectly causing injury or death.

“Formally protecting and enhancing the remaining corridors between core areas at the landscape-scale will potentially ameliorate, or mitigate, the impacts already evident after installation of some facilities, and may prevent foreseeable impacts with additional planned facilities,” said Scott H. Markwith, Ph.D., co-author and a professor in FAU’s Department of Geosciences. “Restoring dispersal corridors and gene flow throughout Peninsular Florida is critical to the Florida panther, its prey, and ancillary species that benefit from a connected Florida ecosystem. This, in turn, will benefit biodiversity and species resiliency at the landscape-scale.”

Solar capacity in Florida is forecasted to grow over 10 years from 1,743 to 12,537 megawatts, with major electric companies planning substantial expansions. The researchers note that USSE facilities installed in clusters may create greater connectivity disruption than single facilities, especially when installed as a nearly continuous barrier perpendicular to the corridor. This practice of clustering facilities is attractive to energy companies because it decreases the amount of supporting infrastructure such as roads and transmission lines, and consolidates maintenance activities.

“We believe that regulatory and permitting agencies, and the electrical companies themselves, should begin taking landscape connectivity into account when planning and permitting USSE facility site locations,” said Leskova.

Impacts are expected on other endangered and protected wildlife species in Florida, including those that have large spatial requirements and/or specific habitat requirements, such as gopher tortoises, eastern indigo snakes, Florida scrub jay, Florida burrowing owls, and Florida black bears. 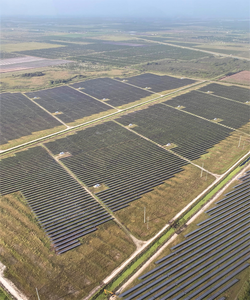 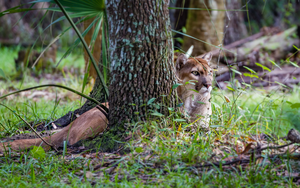