A collaborative project to 3D-print medical devices that was made possible by Virginia Tech’s strong network of trailblazers could open doors to bioinnovation now that it has received federal funding.

Virginia Tech researchers, students, and an alumnus will be exploring microfluidics with the help of grant money from the National Center for Advancing Translational Sciences (NCATS), which operates under the National Institutes of Health.

Microfluidic devices are like the test tubes of the digital age, facilitating the development of next-generation therapeutics and diagnostic breakthroughs, according to Phase Inc., a 3D-printing company based in Charlotte, North Carolina, and collaborator on this project. Virginia Tech alumnus Jeff Schultz, who earned his Ph.D. in materials engineering in 2003, is CEO and co-founder of the company.

Microfluidics provide the backbone for organ-on-a-chip and human-on-a-chip platforms, which simulate a true biological environment where scientists can study and identify treatments for medical issues. The market for microfluidic devices is currently valued at $17 billion worldwide and is projected to grow exponentially as their use in point-of-care medicine and diagnostics increases, according to market research and Phase Inc.’s analysis.

In this project, Schultz and his company will create the microfluidic devices. Rafael Davalos, the L. Preston Wade Professor of biomedical engineering and mechanics, will design and test the devices in his laboratory, the Bioelectromechanical Systems Laboratory.

Davalos and his students will design the microfluidic devices for a number of applications, ranging from rare cell isolation to modeling of the blood-brain barrier.

Josie Duncan, a doctoral student in Davalos’ laboratory who is originally from Charlotte, will be involved in the research to test device properties that enable particles to be manipulated using electrical frequencies. Microfluidics allows researchers to test things on the cell-scale, which increases the accuracy and miniaturizes the process, resulting in a smaller footprint and cheaper cost, Duncan said.

"I'm excited to be a part of pioneering a new method of 3D printing designed specifically for microfluidics,” said Duncan, who received her master’s in mechanical engineering from Virginia Tech. “I'm hopeful for the innovative designs we can create now that 3D structures are feasible."

Edward Jacobs, of Virginia Beach, Virginia, also a doctoral student in Davalos’ lab, will test the blood-brain barrier. This semipermeable border of endothelial cells presents a significant hurdle in developing drugs to treat brain cancer. Together, Jacobs and Davalos aim to demonstrate the ability to incorporate a human brain’s endothelial cells – single-layer cells that line blood vessels and regulate exchanges between the vessels and surrounding tissue – into a microfluidic device to simulate the barrier.

“Having diagnostic or electrical devices embedded into 3D-printed microfluidic devices has the potential to expand the possibilities of chip design, and in turn, open the doors to new applications not previously possible in 2D structures,” Davalos said. “Changing the way these tools are created could open new avenues for research and new discoveries.”

Rather than conventional construction of these devices, Phase will create microfluidics in a multilayered environment that more closely mimics the biological condition and can yield more robust and accurate results.

Phase’s 3D-printing platform will allow researchers and potentially the industry to quickly design and create microfluidics in a matter of hours – as opposed to the days or weeks it now takes to deliver a product. Phase will incorporate small and integrated channels that allow lab-on-a-chip microfluidics to move from 2D to 3D structures, a novel process that allows for smaller and more complex designs that were previously unobtainable.

Schultz said the company is excited to help develop a 3D-printing platform for microfluidics that can speed the process of medical research, drug discovery, and personal health diagnostics. Furthermore, this emerging field represents significant commercial opportunity, according to the NCATS scientific review panel that reviewed and processed the grant.

“We are grateful for the support from the National Center for Advancing Translational Science and for the collaboration with Davalos,” said Schultz, who also has an MBA from the MIT Sloan School of Management. “We look forward to leveraging this grant to further develop our technology to expand the capabilities of creating microfluidics in ways that are not possible with existing 3D printing or conventional manufacturing technologies.”

The grant was awarded through NCATS’ Small Business Innovation Research program. The National Institutes of Health’s small-business programs fund U.S.-owned and -operated small business projects to support their engagement in research and development that have a strong potential for technology commercialization. 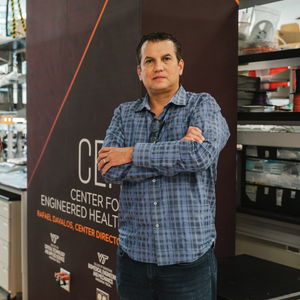 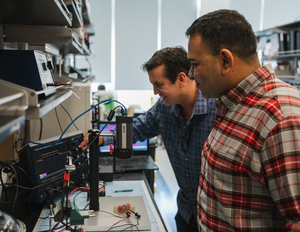