[Note: High-resolution images, illustrations and animations related to this research available for download at this link. Caption and credit information provided.]

WASHINGTON (Jan. 11, 2022) — A team of researchers at the George Washington University has identified a gene that determines whether ultraviolet iridescence shows up in the wings of butterflies. In a study published in Proceedings of the National Academy of Sciences, the team showed that removing the gene in butterflies whose wings lack UV coloration leads to bright patches of UV iridescence in their wings. According to the researchers, the gene plays a critical role in the evolutionary process by which species become distinct from one another.

“As evolutionary biologists, we’re interested in identifying and understanding the genes that drive physical differences between species,” Arnaud Martin, an assistant professor of biology at GW and lead author on the paper, said. “Here we showed how a single gene determines whether ultraviolet coloration is switched on or off in two separate butterfly species. Because the geographic ranges of these two species overlap today, that visual distinction is all the more important when it comes time to find a mate.”

According to the researchers, visual cues such as patterns and coloration, including UV iridescence, help animals recognize their own species and locate potential mates. Mating with the wrong species can be evolutionarily costly and lead to infertile offspring. The male orange sulphur butterfly’s UV-iridescent wings help females of the same species recognize the males as their own.

The two species were ecologically isolated from one another prior to the modern era and developed distinct traits. But, as farmers in the United States intensified their cultivation of alfalfa—a favorite food source for sulphur butterflies—the two species swarmed alfalfa fields, increasing the chances that some would mate with one another and swap genes. The orange sulphur butterfly in particular, once restricted to the western half of North America, has now colonized the eastern part of the continent and merged with populations of the clouded sulphur species.

In the lab, the researchers scanned the genomes of orange sulphurs and clouded sulphurs from an eastern population to see which genes merged and which stayed distinct during the past century of hybridization. Their analysis showed that the two species had clearly swapped and shared genes, and their respective chromosomes looked very similar. The one exception, however, was the sex chromosome, which remained distinct between the two species. This suggested that the sex chromosome hosts key genes that keeps the two species somewhat distinct, including the UV coloration.

The team narrowed down the part of the sex chromosome that causes UV iridescence and identified a gene – called the bric-a-brac gene – that, when expressed in cells, gives rise to the individual microscopic scales comprising a butterfly’s wings. The researchers, however, noticed that a few cells did not express the gene. These turned out to be the cells that give rise to the UV-iridescent scales in wings.

“It was a bit like solving a giant Sudoku puzzle,” Joe Hanly, a postdoctoral scientist in Martin’s lab and co-first author of the paper, said. “When we looked at the result, it was thrilling. Right in front of our eyes, we found a gene that was making these species look different from each other.”

Using a high-powered electron microscope, the team could also see how the presence or absence of the gene shaped the nanostructure of the scales and, they suspected, their ability to amplify UV light. Using the genome editing technique CRISPR, they switched off the gene in the non-iridescent butterflies. Not only did the nanoscale structure of the scales change, but so did the butterflies’ outward appearance.

“Large portions of the butterflies’ bodies were covered in UV-reflecting scales, including the clouded sulphur butterflies,” Vincent Ficarrotta, a doctoral student in Martin’s lab and co-first author of the paper, said. “Scales that normally would only be yellow or orange now reflected UV light.”

Martin says other questions still need to be answered, such as whether the sex chromosomes host other genes involved in mate choice, and the number and exact nature of the mutations in the bric-a-brac gene that underlie the species’ differences. He notes, however, that studying these two butterfly species offered a one-of-a-kind opportunity to see evolution in action.

“Speciation studies often compare species that are extremely early in the separation process or that have been separated so long that they have accumulated too many differences for a meaningful genomic analysis,” Martin said. “Here we have a pair of species that are not too identical, not too distinct, where the hybridization has been intense but is less than a century old. It’s a goldilocks system for studying speciation.”

The paper, “A genetic switch for male UV-iridescence in an incipient species pair of sulphur butterflies,” was published on Jan. 11 in the journal Proceedings of the National Academy of Sciences. The National Science Foundation funded this research.

Researchers Switch Off Gene to Switch On Ultraviolet in Butterfly Wings 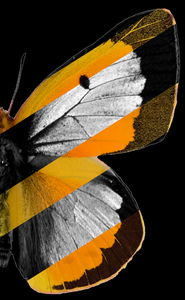 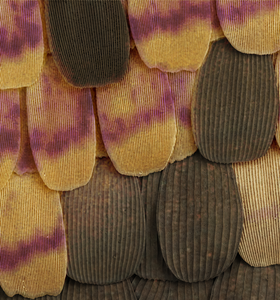 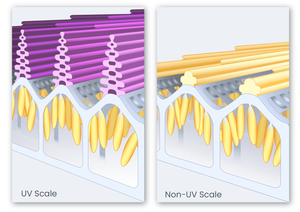 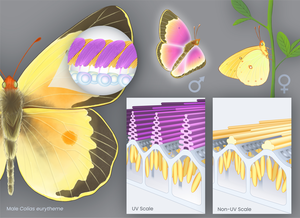