In 2018, Rainforest Trust celebrated its 30th anniversary by hosting an auction offering naming rights for some new-to-science species. The funds raised at the auction benefited the conservation of the newly recognized species. It is estimated that about 100 new species are discovered each year.

The international team that discovered the new rainfrog was led by Abel Batista, Ph.D. (Panama) and Konrad Mebert, Ph.D. (Switzerland). The two have collaborated for 10 years in Panama and have published eight scientific articles together and described 12 new species.

The team found the frog on Mount Chucanti, a sky island surrounded by lowland tropical rainforest in eastern Panama. Reaching its habitat in the cloud forest required access via horseback through muddy trails, hiking up steep slopes, by-passing two helicopters that crashed decades ago, and camping above 1000 m elevation. The Chucanti reserve was established by the Panamanian conservation organization ADOPTA with support from Rainforest Trust.

The Greta Thunberg Rainfrog exhibits distinctive black eyes—unique for Central American rainfrogs. Its closest relatives inhabit northwestern Colombia. Unfortunately, the frog’s remaining habitat is severely fragmented and highly threatened by rapid deforestation for plantations and cattle pasture. The Chucanti Reserve where the frog was first found is part of a growing network of natural parks and preserves championed by the Panamanian Government.

The Rainforest Trust auction winner wanted to name the frog in honor of Greta Thunberg and her work in highlighting the urgency in preventing climate change. Her "School Strike for Climate" outside the Swedish parliament has inspired students worldwide to carry out similar strikes called Fridays for Future. She has impressed global leaders and her work is drawing others to action for the climate.

The plight of the Greta Thunberg Rainfrog is closely linked to climate warming, as rising temperatures would destroy its small mountain habitat. The Mount Chucanti region already has lost more than 30% of its forest cover over the past 10 years. Deadly chytrid fungus pose additional threats for its amphibians. Conservation of the remaining habitat is critical to ensure the survival of the frog. The important work in Panama by ADOPTA and Rainforest Trust globally to protect rainforests is critical to the survival of this frog and many other endangered species.

Since 1988, Rainforest Trust has been safeguarding imperiled tropical habitats and saving endangered species by establishing protected areas in partnership with local organizations and communities. With its partners, Rainforest Trust has safeguarded more than 37 million acres of vital habitat across Latin America, Africa, Asia and the Pacific. Rainforest Trust is a nonprofit organization that relies upon the generous support of the public to successfully implement its important conservation action. The organization is proud of earning a 4-star rating from Charity Navigator. Learn more about the work of Rainforest Trust by visiting www.rainforesttrust.org, Twitter, Instagram, TikTok or Facebook.

Asociación ADOPTA el Bosque Panamá (Adopt a Panama Rainforest Association) is a Panamanian non-profit organization, whose mission is to promote the conservation of natural resources and their sustainable use for the benefit of both People and Wildlife.  Their flagship project is the preservation of Cerro Chucanti, an isolated cloudforest in Panama´s Darien province which has turned out to be an endemism hotspot with wildlife found nowhere else on Earth, but that lacks any formal legal protection.  Their commitment has resulted in the creation of the Chucanti Private Nature Reserve, among the largest in the region.

A new rainfrog of the genus Pristimantis (Anura, Brachycephaloidea) from central and eastern Panama 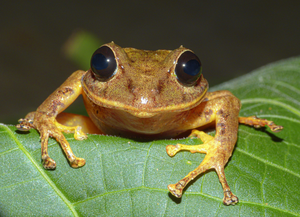 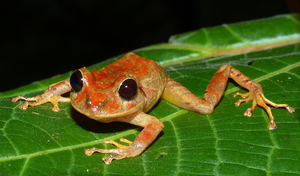 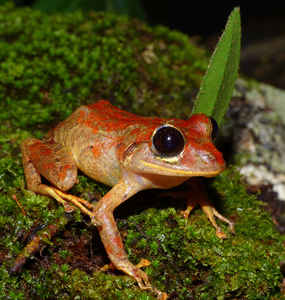 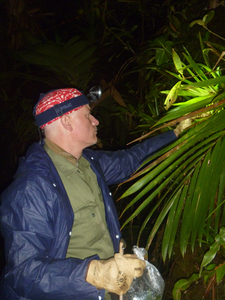 Konrad Mebert working in the field 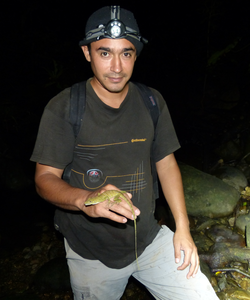 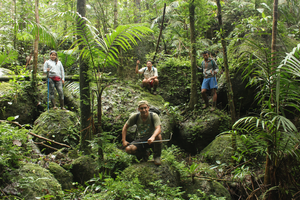 Part of the team in the field