Stars are giant factories that produce most of the elements in the Universe – including the elements in us, and in the Earth’s metal deposits. But what stars produce changes over time.

Two new papers published in MNRAS shed light on how the youngest generation of stars will eventually stop contributing metals back to the universe.

The authors are all members of ASTRO 3D, the ARC Centre of Excellence for All Sky Astrophysics in 3 Dimensions. They are based at Monash University, the Australian National University (ANU), and the Space Telescope Science Institute.

“We know the first two elements of the periodic table – hydrogen and helium – were created in the Big Bang,” says Amanda Karakas, first author of a paper studying metal-rich stars.

“Over time, the stars that came after the Big Bang produce heavier elements.”

These “metal-rich” stars, like our Sun, spew out their products into space, enriching the composition of the galaxy over time.

These objects affect us directly as around half of the carbon and all elements heavier than iron are synthesised by stars like our Sun.

About 90 per cent of all the lead on Earth, for example, was made in low-mass stars which also produce elements such as strontium and barium.

But this ability to produce more metals changes depending on the composition of a star at its birth. “Introducing just a tiny bit more metal into the stars’ gas has really large implications on their evolution,” says Giulia Cinquegrana. Her paper uses modelling from the earlier paper to study the chemical output of metal-rich stars.

“We discovered that, at a certain threshold of initial metal content in the gas, stars will stop sending more metals into the Universe over their lifetime,” Cinquegrana says.

The Sun, born about 4.5 billion years ago, is a typical “middle-aged” star. It is “metal-rich” compared to the first stellar generations and has a heavy element content similar to many other stars in the centre of the Milky Way.

“Our papers predict the evolution of younger stars (most-recent generations) which are up to seven times more metal-rich than the Sun,” says Karakas.

“My simulations show that this really high level of chemical enrichment causes these stars to act quite weirdly, compared to what we believe is happening in the Sun,” says Cinquegrana.

“Our models of super metal-rich stars show that they still expand to become red giants and go on to end their lives as white dwarfs, but by that time they are not expelling any heavy elements. The metals get locked up in the white dwarf remnant,” she says.

“But the process of stars constantly adding elements to the Universe means that the make-up of the Universe is always changing. In the far distant future, the distribution of elements will look very different to what we see now in our Solar System,” says Karakas.

The papers are published in Monthly Notices of the Royal Astronomical Society, issue Jan 2022 and Feb 2022. They were published earlier on arXiv.

We present new stellar evolutionary sequences of very metal-rich stars evolved with the Monash Stellar Structure code and with MESA. The Monash models include masses of 1 − 8𝑀⊙ with metallicities 𝑍 = 0.04 to 𝑍 = 0.1 and are evolved from the main sequence to the thermally-pulsing asymptotic giant branch (AGB). These are the first 𝑍 = 0.1 AGB models in the literature. The MESA models include intermediate-mass models with 𝑍 = 0.06 to 𝑍 = 0.09 evolved to the onset of the thermally pulsing phase. Third dredge-up only occurs in intermediate-mass models 𝑍 ≤ 0.08. Hot bottom burning (HBB) shows a weaker dependence on metallicity, with the minimum mass increasing from 4.5𝑀⊙ for 𝑍 = 0.014 to ≈ 5.5𝑀⊙ for Z = 0.04, 6𝑀⊙ for 0.05 ≤ 𝑍 ≤ 0.07 and above 6.5𝑀⊙ for 𝑍 ≥ 0.08. The behaviour of the 𝑍 = 0.1 models is unusual; most do not experience He-shell instabilities owing to rapid mass-loss on the early part of the AGB. Turning off mass-loss produces He-shell instabilities, however thermal pulses are weak and result in no third dredge-up. The minimum mass for carbon ignition is reduced from 8𝑀⊙ for 𝑍 = 0.04 to 7𝑀⊙ for 𝑍 = 0.1, which implies a reduction in the minimum mass for core-collapse supernovae. MESA models of similarly high metallicity (𝑍 = 0.06 − 0.09) show the same lowering of the minimum mass for carbon ignition: carbon burning is detected in a 6𝑀⊙ model at the highest metallicity (𝑍 = 0.09) and in all 7𝑀⊙ models with 𝑍 ≥ 0.06. This demonstrates robustness of the lowered carbon burning threshold across codes.

Paper 2: The most metal-rich stars in the universe

Low and intermediate mass stars with super solar metallicities comprise a known portion of the universe. Yet yields for asymptotic giant branch (AGB) stars with metallicities greater than 𝑍 = 0.04 do not exist in the literature. This contributes a significant un- certainty to galactic chemical evolution simulations. We present stellar yields of AGB stars for 𝑀 = 1−8𝑀⊙ and 𝑍 = 0.04−0.10. We also weight these yields to represent the chemical contribution of a metal-rich stellar population. We find that as metallicity increases, the efficiency of the mixing episodes (known as the third dredge up) on the thermally pulsing AGB (TP-AGB) decrease significantly. Consequently, much of the nucleosynthesis that occurs on the TP-AGB is not represented on the surface of very metal-rich stars. It instead remains locked inside the white dwarf remnant. The temperatures at the base of the convective envelope also decrease with increasing metallicity. For the intermediate mass models, this results in the occurrence of only partial hydrogen burning at this location, if any burning at all. We also investigate heavy element production via the slow neutron capture process (s-process) for three 6𝑀⊙ models: 𝑍 = 0.04, 0.05 and 0.06. There is minor production at the first s-process peak at strontium, which decreases sharply with increasing metallicity. We find the chemical contributions of our models are dominated by proton capture nucleosynthesis, mixed to the surface during first and second dredge up events. This conclusion is mirrored in our stellar population yields, weighted towards the lower mass regime to reflect the mass distribution within a respective galaxy. 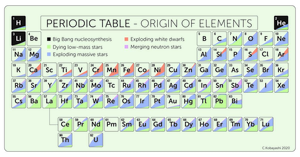 Periodic table with origin of the elements