Inside a bamboo culm in Thailand, researchers discovered the first case of a genus of tarantula that lives exclusively in bamboo stalks.

A famous wildlife YouTuber from Thailand, JoCho Sippawat, was the first to find the new species of bamboo culm tarantula in Mae Tho, Mueang Tak district, Tak province. He then collaborated with arachnologists Dr. Narin Chomphuphuang (Khon Kaen University) and Chaowalit Songsangchote (Kasetsart University), who studied and described the new genus.

The new tarantula genus bears the name Taksinus in honor of the Thai king Taksin the Great. The researchers chose the name in recognition of Taksin the Great’s old name, Phraya Tak - governor of Tak province, which is where the new genus was discovered. After the Second Fall of Ayutthaya in 1767, Taksin the Great was the only king of the Thonburi Kingdom to become a key leader of Siam, prior to the establishment of Thailand.

What distinguishes Taksinus against all other Asian arboreal genera is the relatively short embolus of the male pedipalps, which is used to transport sperm to the female seminal receptacles during mating. Its habitat type and distribution are also different from those of related species. While Asian arboreal tarantulas have been reported in Indonesia, Malaysia, Singapore, Sumatra, and Borneo, this is the first such genus known from Northern Thailand.

Tarantulas from Southeast Asia can be either terrestrial or arboreal. Arboreal tarantulas spend time on different types of trees, but, to date, this is the first tarantula that is only found on a specific tree type.

“These animals are truly remarkable; they are the first known tarantulas ever with a bamboo-based ecology,” Dr. Chomphuphuang said.

The tarantulas were discovered inside mature culms of Asian bamboo stalks (Gigantochloa sp.), hence their scientific name - Taksinus bambus. Their nest entrances range in size from 2–3 cm to a large fissure and feature a silk-lined tubular burrow, either in the branch stub or in the middle of the bamboo culms. All the tarantulas found living in the culms had built silken retreat tubes that covered the stem cavity.

Few people realize how much of Thailand's wildlife remains undocumented... We are primarily on a mission to research and save the biodiversity and wildlife within these forests from extinction, especially species-specific microhabitats.

“We examined all of the trees in the area where the species was discovered. This species is unique because it is associated with bamboo, and we have never observed this tarantula species in any other plant. Bamboo is important to this tarantula, not only in terms of lifestyle but also because it can only be found in high hill forests in the northern part of Thailand, at an elevation of about 1,000 m. It is not an exaggeration to say that they are now Thailand's rarest tarantulas,” says Dr. Chomphuphuang.

These spiders cannot bore into bamboo stems themselves. Sometimes, they rely on the assistance of other animals such as the bamboo borer beetle, bamboo worm, bamboo-nesting carpenter bee, and some rodents. In other cases, rapid changes in moisture content can cause bamboo to crack.

“Few people realize how much of Thailand's wildlife remains undocumented,” Dr.  Chomphuphuang points out. “Thai forests now cover only 31.64% of the country's total land area. We are primarily on a mission to research and save the biodiversity and wildlife within these forests from extinction, especially species-specific microhabitats.”

First tarantula to live in bamboo stalks found in Thailand 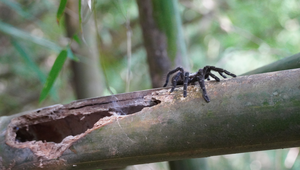 Taksinus bambus tarantula in its habitat 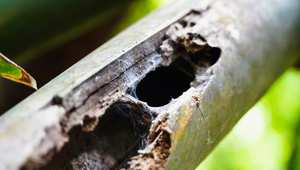 The habitat of the tarantula Taksinus bambus 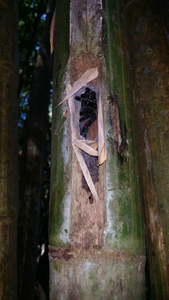 Taksinus bambus in the bamboo stalk 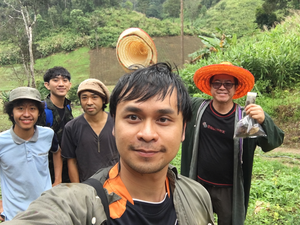 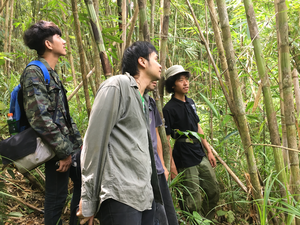 Looking at the entrance hole of a bamboo culm tarantula