Although antiretroviral therapy is effective in saving AIDS patients’ lives, implementing the therapy worldwide has been drastically hampered by the lack of treatment monitoring diagnostics and disease management. According to recent statistics by USAIDS, the coverage of antiretroviral therapy is still only 59 percent, despite being affordable or freely available in most countries. Moreover, worldwide, about 1 in 4 people who have contracted the virus are unaware of their HIV status.

Florida Atlantic University’s College of Engineering and Computer Science, in collaboration with FAU’s Schmidt College of Medicine, has received a three-year, $1.3 million grant from the National Institutes of Health (NIH) for an automated HIV self-testing assay. Another $1.3 million will potentially be awarded after a programmatic review of the progress made in phase I.

With this grant, researchers are developing an affordable, disposable self-testing HIV-1 chip that can selectively detect HIV from whole blood samples, be highly sensitive to detect HIV during the acute infection, treatment and viral rebound; be rapid within 40 minutes; highly stable without requiring refrigeration; and fully automated providing true sample-in-answer-out ability.

“The greatest challenge to reducing HIV in developing countries that have limited resources is the absence of self-testing assays for viral load and the lack of trained technicians as well as modern laboratory infrastructure,” said Waseem Asghar, Ph.D., principal investigator and an associate professor in FAU’s Department of Electrical Engineering and Computer Science within the College of Engineering and Computer Science. “Currently, there is no reliable technology that can detect HIV during the early stages of the infection or measure viral rebound in antiretroviral therapy in treated patients in self-testing format.”

One of the fundamental challenges to reduce HIV burden and its prevalence is the absence of HIV self-testing assays that are sensitive enough to detect new HIV infections during the first two-weeks, which is the acute phase, post-infection and viral rebound in virally-suppressed patients receiving antiretroviral therapy. Current self-testing technologies only detect the host antibody response to HIV infection, which usually arises three to four weeks after the initial infection and it is not an indicator of therapy failure and viral rebound.

Asghar is developing this technology with co-investigator Massimo Caputi, Ph.D., a professor of biomedical science in FAU’s Schmidt College of Medicine, who has expertise in the molecular biology of HIV-1 and the mechanisms of regulating cellular and viral splicing. Caputi has made important contributions to the understanding of how cellular proteins modulate the replication of the HIV-1 genome.

The new technology employs an innovative microfluidic design integrated with molecular amplification that allows HIV testing without the need for skilled technicians to operate, making it suitable for self-testing format in developing countries as well as developed countries. The researchers plan to validate the functioning microchip with blood/plasma samples from more than 200 HIV-infected subjects.

“No molecular HIV self-testing technologies have yet been commercialized that are able to detect HIV during the early stages of acute infection or viral rebound in suppressed patients on antiretroviral therapy and there is an urgent need to develop reliable and affordable HIV self-testing technologies,” said Stella Batalama, Ph.D., dean, College of Engineering and Computer Science. “The technology that is being developed by professors Asghar and Caputi and our colleagues will be a game changer for helping to increase access to HIV testing and for improving treatment outcomes.”

The FAU College of Engineering and Computer Science is internationally recognized for cutting edge research and education in the areas of computer science and artificial intelligence (AI), computer engineering, electrical engineering, biomedical engineering, civil, environmental and geomatics engineering, mechanical engineering, and ocean engineering. Research conducted by the faculty and their teams expose students to technology innovations that push the current state-of-the art of the disciplines. The College research efforts are supported by the National Science Foundation (NSF), the National Institutes of Health (NIH), the Department of Defense (DOD), the Department of Transportation (DOT), the Department of Education (DOEd), the State of Florida, and industry. The FAU College of Engineering and Computer Science offers degrees with a modern twist that bear specializations in areas of national priority such as AI, cybersecurity, internet-of-things, transportation and supply chain management, and data science. New degree programs include Master of Science in AI (first in Florida), Master of Science and Bachelor in Data Science and Analytics, and the new Professional Master of Science and Ph.D. in computer science for working professionals. For more information about the College, please visit eng.fau.edu. 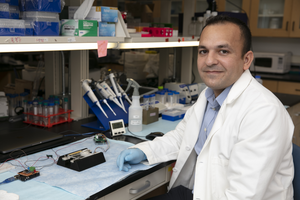 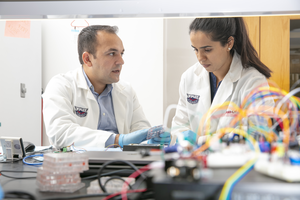