Many of the birds that awaken us each morning learn their melodious songs the same way that humans learn a dialect — from parents and neighbors.

But to most biologists, learning songs through mimicry is an uncertain and error-prone process, resulting in slow but inevitable change in song over the years.

A recent study by biologists from the University of California, Berkeley, and Missouri State University in Springfield, however, documents songs in East African sunbirds that have remained nearly unchanged for more than 500,000 years, and perhaps for as long as 1 million years, making the songs nearly indistinguishable from those of relatives from which they've long been separated.

The amazingly static nature of their songs may be due to a lack of change in these birds' environments, which are stable mountain forests — so-called sky islands — isolated from other sky island populations of the same or similar species for tens of thousands to millions of years. The coloration of the birds’ feathers has changed little, as well, making their plumage nearly indistinguishable from each other, even though some are separate, but closely related, species.

"If you isolate humans, their dialects quite often change; you can tell after a while where somebody comes from. And song has been interpreted in that same way," said senior author Rauri Bowie, UC Berkeley professor of integrative biology and a curator in the campus’s Museum of Vertebrate Zoology. "What our paper shows is that it's not necessarily the case for birds. Even in traits that should be very labile, such as song or plumage, you can have long periods of stasis."

Bowie said that the idea that bird song readily changes likely arose from studies of Northern Hemisphere birds, which have encountered changing environmental conditions repeatedly, with glaciers coming and going over the last tens of thousands of years. Changing environments cause changes in plumage, bird song, mating behavior and much more.

But mountaintop environments in the tropics, particularly in Eastern Africa — from Mt. Kenya to Mt. Kilimanjaro in Tanzania south through Malawi into Mozambique — have seen little geological change over that same time period. Hence, the birds the researchers studied — lineages of the eastern double-collared sunbirds in the genus Cinnyris — had no impetus to alter either their colorful plumage or their often intricate songs.

"For social signals like song, or bright plumage colors, to take another example in birds, evolutionary biologists have focused a great deal on how the signals seem to be able to evolve quickly and in pretty random directions," said first author Jay McEntee, an assistant professor of biology at Missouri State. "The result from our work — that there can be long periods without much change for learned song — suggests we should be asking which forces can constrain these social signals over time, in addition to asking which forces cause changes."

According to Bowie, biologists recognize two types of barriers to mating that tend to generate new species of animals. Pre-mating barriers are signals that stop an individual from mating with another. In birds, this could be because it doesn’t sing the right song or doesn’t look the same as the other bird, but if the two did mate, they could produce offspring. Post-mating barriers are actual mechanistic reproductive incompatibilities, such that they don't produce offspring, even if they mate.

"Song is thought to be one of the most important pre-mating isolation barriers, one of the key ways that birds tell each other apart," he said. “That a learned trait can remain static for hundreds to thousands of years is simply remarkable, a discovery that reflects how much the field study of tropical systems has to offer the scientific community and curious observer.”

McEntee, Bowie and their colleagues in Africa, Europe and the U.S. published their findings last month in the journal Proceedings of the Royal Society B.

Sunbirds are the most diverse and among the most colorful groups of birds in Africa and Asia, filling a niche — eating nectar — occupied by hummingbirds in the Americas, though they are unrelated to hummingbirds. Many have curved beaks that allow them to dip deeply into recurved flowers. Bowie calls them "the little jewels that appear before you."

Among these wide-ranging birds are species that have become isolated on the tops of high mountains, hence the term "sky island sunbirds." Bowie, a native of South Africa, has long been intrigued by these birds — for his Ph.D. thesis, he showed that what people once thought were two species of eastern double-collared sunbird distributed over numerous mountaintops in East Africa were actually at least five species and maybe six. While they look very similar, they are deeply divergent genetically, suggesting a long period of isolation on different mountaintops where they are now recognized as different species.

He began to wonder, however, if their songs had remained as unchanged as their plumage. McEntee pursued that question as a doctoral student with Bowie, visiting 15 — nearly all — of the sky islands in East Africa between 2007 and 2011 and recording songs from 123 individual birds from the six different lineages of eastern double-collared sunbirds. The sky island populations of these sunbirds are ideal for exploring the evolution of song, since the isolated populations allowed comparison within individual species, between two closely related species, and among all five species.

The researchers developed a statistical technique for testing between gradual change and bursts of rapid change in a trait such as birdsong and discovered that song differences seemed uncorrelated with how long individual populations had been separated, as estimated from genetic differences in their DNA. Two populations of long-separated species had nearly identical songs, while two other similar-looking species that had been separated for less time had widely divergent songs.

"What surprised me the most in carrying out this research was how similar these learned songs of isolated populations were, within species, and how obvious the song differences were where they occur," McEntee said. "The first time (Tanzanian co-author) Maneno Mbilinyi and I were making a sound recording of Cinnyris fuelleborni, what we call Fuelleborn's sunbird, we thought there must be a different bird nearby that was singing simultaneously, because the song we were listening to didn't make sense to us. We were looking directly at the singing bird, watching it move its beak, and couldn't believe just how different its song was from the really similar- looking Moreau's sunbird, Cinnyris moreaui, which we had just been recording in a different part of the Udzungwa Mountains."

On the other hand, the songs of Cinnyris fuelleborni from populations in Ikokoto in Tanzania and Namuli in Mozambique are almost identical, despite being separated by hundreds of kilometers and hundreds of thousands of years.

Based on this study, the biologists argue that characteristics such as learned song and plumage don't inevitably drift in isolated populations, but that they evolve in pulses, punctuated by long periods, perhaps hundreds of thousands of years, of little change.

"We are showing, using a really nice setup where we could look at song evolution using naturally isolated populations, that you don't see this gradual change through cultural or genetic drift at all," Bowie said. "You see these sharp bursts of change in a trait such a birdsong and lots and lots of evidence for stasis, even when that trait should be very plastic. To me, that was a really fascinating result."

The researchers are continuing their research in East Africa to determine what drives some birds to alter their songs, but not others. Bowie and UC Berkeley professors Jim McGuire and Robert Dudley are part of a $2 million grant from the National Science Foundation () to understand the genetic and physiological causes of the convergent evolution that makes sunbirds and hummingbirds so similar in looks and ecological niche.

Punctuated evolution in the learned songs of African sunbirds 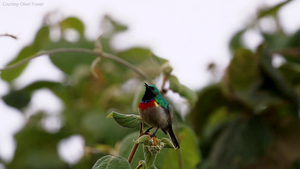 These sunbirds keep singin' their song